FILL IN THE BLANK WITH THE BEST ANSWER. 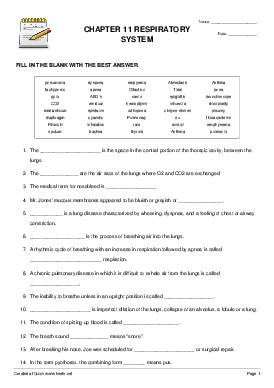 The mediastinum is the space in the central portion of the thoracic cavity, between the lungs. The alveoli are the air sacs of the lungs where O2 and CO2 are exchanged. The medical term for nosebleed is epistaxis. Mr. Jones' mucous membranes appeared to be bluish or grayish or cyanotic. Asthma is a lung disease characterized by wheezing, dyspnea, and a feeling of chest or airway constriction, Inhalation is the process of breathing air into the lungs. A rhythmic cycle of breathing with an increase in respiration followed by apnea is called cheyne-stokes respiration. A chronic pulmonary disease in which it is difficult to exhale air from the lungs is called emphysema. The inability to breathe unless in an upright position is called orthopnea. Atelectasis is imperfect dilation of the lungs, collapse of an alveolus, a lobule or a lung. The condition of spitting up blood is called hemoptysis. The breath sound Rhonchi means "snore". After breaking his nose, Joe was scheduled for rhinoplasty or surgical repair. In the term pyothorax, the combining form py/o means pus. Periods of temporary cessation of breathing is called apnea. Pulmonary function tests are series of tests to determine the diffusion of O2 and CO2 across the cell membrane in the lungs. The pulmonologist will use a bronchoscope to visually examine the larynx, trachea, and bronchi. The epiglottis acts as a lid to prevent aspiration of food into the trachea. Mrs. Kay was having episodes of dyspnea or difficult breathing post-op. During an anxiety attack, Mindy was tachypneic or breathing fast. H3N2 or influenza is an ACUTE contagious respiratory infection caused by a virus. After receiving respiratory treatments for a severe respiratory infection, Mrs. Johnson was able to cough up a significant amount of sputum. Olfaction is the process of smelling. In determining respiratory acidosis/alkalosis or metabolic acidosis/alkalosis, Arterial Blood Gases or ABG's are vital. A surgical puncture of the chest to remove fluid in called a thoracentesis. The physician reported to Mr. Noon that his chest x-ray showed he had pneumonia or inflammation of the lung. Tidal volume is the amount of air in a single inspiration or exhalation. The diaphragm is a musculomembranous wall that separates the thoracic and abdominal cavities. Pus located in the pleural cavity is aka empyema. Inflammation of the pleura or lining of the lung is called pleurisy. The prefix eu- in eupnea means good or normal. As in good or normal breathing. Located in the larynx, the thyroid cartilage or adam's apple is the largest cartilage in that structure. The words part for nose are nas/o or rhin/o. The right and left bronchus are two main branches of the trachea. The word part for breathing is -pnea. Asthma is an inflammatory disease of the bronchi characterized by wheezing, dyspnea and constriction of the chest. The residual volume is the amount of air remaining in the lungs after maximal exhalation. This breath sound called a rale, is a crackling or rattling sound heard in the chest. The word parts pulm/o or pulmon/o means lung. The respiratory system's primary function is to furnish O2 and to remove CO2 from the cells and tissues.