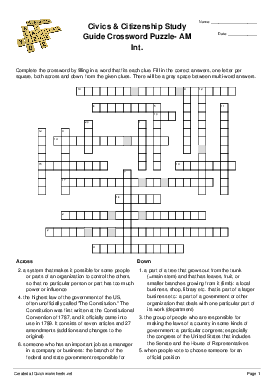 Branch a part of a tree that grows out from the trunk (=main stem) and that has leaves, fruit, or smaller branches growing from it (limb): a local business, shop, library etc. that is part of a larger business etc.: a part of a government or other organization that deals with one particular part of its work (department) Checks and Balances a system that makes it possible for some people or parts of an organization to control the others, so that no particular person or part has too much power or influence Congress the group of people who are responsible for making the laws of a country in some kinds of government: a particular congress; especially the congress of the United States that includes the Senate and the House of Representatives Constitution the highest law of the government of the US, often unofficially called "The Constitution." The Constitution was first written at the Constitutional Convention of 1787, and it officially came into use in 1789. It consists of seven articles and 27 amendments (additions and changes to the original) Election when people vote to choose someone for an official position Executive someone who has an important job as a manager in a company or business: the branch of the federal and state government responsible for making decisions on policy, running the government etc., rather than for making laws Government the group of people who govern a country or state: a form or system of government: the process or way of governing House of Representatives the larger part of the U.S. Congress Judicial the branch of government connected with a court of law or the legal system that is charged with the interpretation of laws and the administration of justice; the judiciary: relating to the law, judges, or their decisions Law the whole system of rules that people in a particular country or area must obey Legislative the branch of government having the power to make laws; the legislature Majority most of the people or things in a group: if one person or group wins a majority in an election, they win more votes than other people or groups Minority a small group of people or things within a much larger group: a group of people of a different race, religion etc. from most other people in that country Political Party a political organization with particular beliefs and aims, which you can vote for in elections Represent to officially speak or take action for another person or group of people: to have been elected to a parliament, council etc. by the people in a particular area: to be a symbol of something Senate the smaller group of the two groups of people who meet to discuss and make the laws of a country, state, etc.: the smaller group of the two groups that form the U.S. Congress Separation of Powers a fundamental principle of the United States government, whereby powers and responsibilities are divided among the legislative branch, executive branch, and judicial branch Supreme Court the most important court of law in some countries or some states of the US Supreme Court Justice one of the nine judges of the US Supreme Court. Each Supreme Court Justice is chosen by the president of the US and must then be accepted by Congress, and they usually have this position for the rest of their lives. The most important judge is called the chief justice Vote to show which person or party you want, or whether you support a plan, by marking a piece of paper, raising your hand etc.