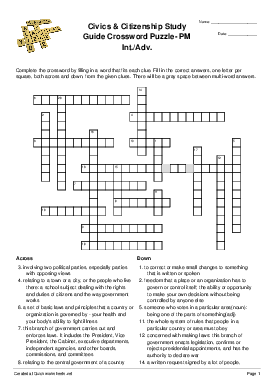 Amend to correct or make small changes to something that is written or spoken Autonomy freedom that a place or an organization has to govern or control itself; the ability or opportunity to make your own decisions without being controlled by anyone else Bipartisan involving two political parties, especially parties with opposing views Civic/Civics relating to a town or a city, or the people who live there: a school subject dealing with the rights and duties of citizens and the way government works Constituent someone who votes in a particular area(noun): being one of the parts of something(adj) Constitution a set of basic laws and principles that a country or organization is governed by - your health and your body's ability to fight illness Executive this branch of government carries out and enforces laws. It includes the President, Vice President, the Cabinet, executive departments, independent agencies, and other boards, commissions, and committees Federal relating to the central government of a country such as the US, rather than the government of one of its states Government the group of people who govern a country or state; a form or system of government Judicial relating to the law, judges, or their decisions U.S. Government: Courts decide arguments about the meaning of laws and how they are applied. They also decide if laws violate the Constitution Law the whole system of rules that people in a particular country or area must obey Legislative concerned with making laws: this branch of government enacts legislation, confirms or rejects presidential appointments, and has the authority to declare war Local relating to the particular area you live in, or the area you are talking about (adj); connected with a particular area, especially the area where something is produced: someone who lives in the place where you are or the place that you are talking about (noun) Petition a written request signed by a lot of people, asking someone in authority to do something or change something(noun); to ask the government or an organization to do something by sending them a petition(verb) Ratify to make a written agreement official by signing it Representative someone who has been chosen to speak, vote, or make decisions for someone else Republic a country governed by elected representatives of the people, and led by a president, not a king or queen Revolution a complete change in ways of thinking, methods of working etc.: a time when people change a ruler or political system by using force or violence; a circular movement around something Separation of Powers a fundamental principle of the United States government, whereby powers and responsibilities are divided among the legislative branch, executive branch, and judicial branch Sovereignty complete freedom and power to govern; the power that an independent country has to govern itself