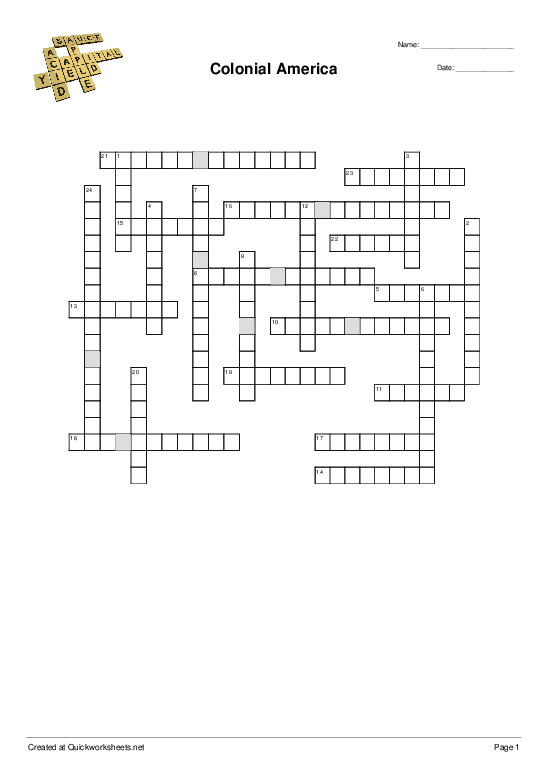 indigo blue dye obtained from plants- southern cash crop plantation large area of land usually worked by slaves Puritan person who follows strict moral rules-pleasure is wrong- New England southern region of: Maryland, Virginia, South Carolina, North Carolina, Georgia Compact Mayflower ______________ was an agreement among Pilgrims about the new government they would follow Pennsylvania Colony founded by William Penn ship building one of the primary industries of New England Bread Basket nickname of the Middle Colonies cash crop crop grown to be sold, traded, exported for large profit Rhode Island one of the Northern Colonies: Massachusetts, Connecticut, New Hampshire, & ____________ wealth a unifying motivator for all regions of the colonies education an important aspect of society for the Northern Colonies slavery an issue that becomes a point of conflict as colonists move west Virginia Colony named after Queen Elizabeth I Georgia Youngest colony and was named after King George Middle Colonies this region grew a lot of grains for bread making and trade northern this region had rocky soil, shot growing seasons, and had small farms New England these colonies supported public education with tax revenue molasses product brought to New England to make rum then shipped to Africa workers one of the needs that drove the spread of the slave trade Middle Passage the leg of the trip when slaves were transported to the Americas Africa manufactured goods including metal & iron tools from England to ___________ Portugal Country who began the slave trade in earnest as they explored the west coast of Africa looking for a route to the Far East Triangular Trade the name of the intercontinental route for raw materials, manufactured goods, and slaves