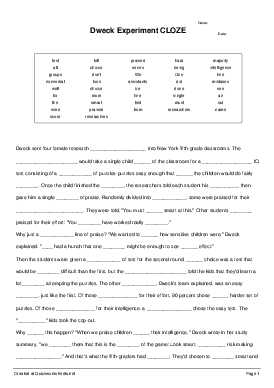 Dweck sent four female research assistants into New York fifth-grade classrooms. The researchers would take a single child out of the classroom for a nonverbal IQ test consisting of a series of puzzles-puzzles easy enough that all the children would do fairly well. Once the child finished the test, the researchers told each student his score, then gave him a single line of praise. Randomly divided into groups, some were praised for their intelligence. They were told, "You must be smart at this." Other students were praised for their effort: "You must have worked really hard." Why just a single line of praise? "We wanted to see how sensitive children were," Dweck explained. "We had a hunch that one line might be enough to see an effect." Then the students were given a choice of test for the second round. One choice was a test that would be more difficult than the first, but the researchers told the kids that they'd learn a lot from attempting the puzzles. The other choice, Dweck's team explained, was an easy test, just like the first. Of those praised for their effort, 90 percent chose the harder set of puzzles. Of those praised for their intelligence, a majority chose the easy test. The "smart" kids took the cop-out. Why did this happen? "When we praise children for their intelligence," Dweck wrote in her study summary, "we tell them that this is the name of the game: Look smart, don't risk making mistakes." And that's what the fifth-graders had done: They'd chosen to look smart and avoid the risk of being embarrassed.