Match each definition to the appropriate word, by placing the letters on the lines. 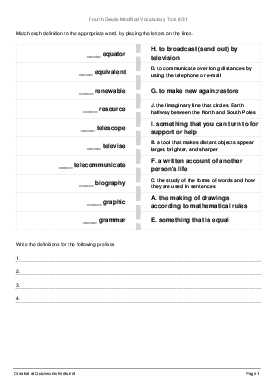 ____ equator J. the Iimaginary line that circles Earth halfway between the North and South Poles ____ equivalent E. something that is equal ____ renewable G. to make new again;restore ____ resource I. something that you can turn to for support or help ____ telescope B. a tool that makes distant objects appear larger, brighter, and sharper ____ televise H. to broadcast (send out) by television ____ telecommunicate D. to communicate over long distances by using the telephone or e-mail ____ biography F. a written account of another person's life ____ graphic A. the making of drawings according to mathematical rules ____ grammar C. the study of the forms of words and how they are used in sentences

Write the definitions for the following prefixes