Hitler and the Nazi's - Matching Pairs

Instructions: Match the definitions with the correct word. Paste into your books when it has been completed. 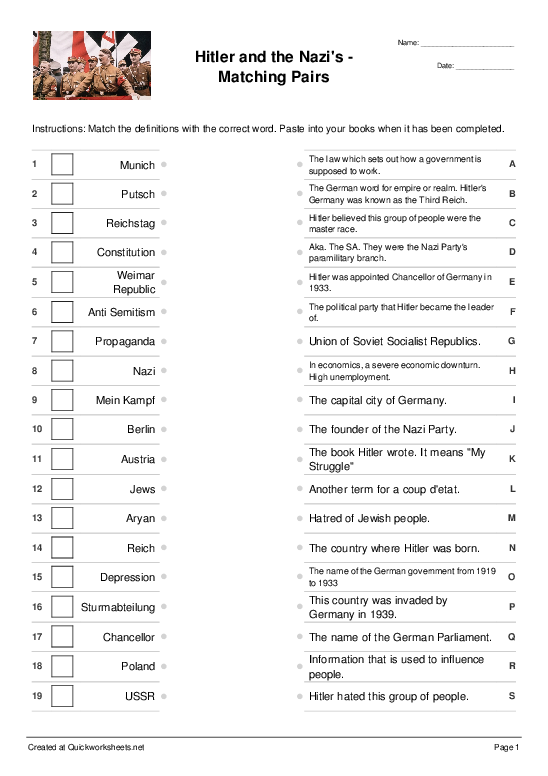 Munich The main city in the German state / region of Bavaria. Putsch Another term for a coup d'etat. Reichstag The name of the German Parliament. Constitution The law which sets out how a government is supposed to work. Weimar Republic The name of the German government from 1919 to 1933 Anti Semitism Hatred of Jewish people. Propaganda Information that is used to influence people. Nazi The political party that Hitler became the leader of. Mein Kampf The book Hitler wrote. It means "My Struggle" Berlin The capital city of Germany. Austria The country where Hitler was born. Jews Hitler hated this group of people. Aryan Hitler believed this group of people were the master race. Reich The German word for empire or realm. Hitler's Germany was known as the Third Reich. Depression In economics, a severe economic downturn. High unemployment. Sturmabteilung Aka. The SA. They were the Nazi Party's paramilitary branch. Chancellor Hitler was appointed Chancellor of Germany in 1933. Poland This country was invaded by Germany in 1939. USSR Union of Soviet Socialist Republics. Anton Drexler The founder of the Nazi Party.