Student Instructions: Listen carefully as your teacher reads the paragraphs below. Fill in the blank spaces by using the words from the box below. Paste into your books when you have completed this activity. 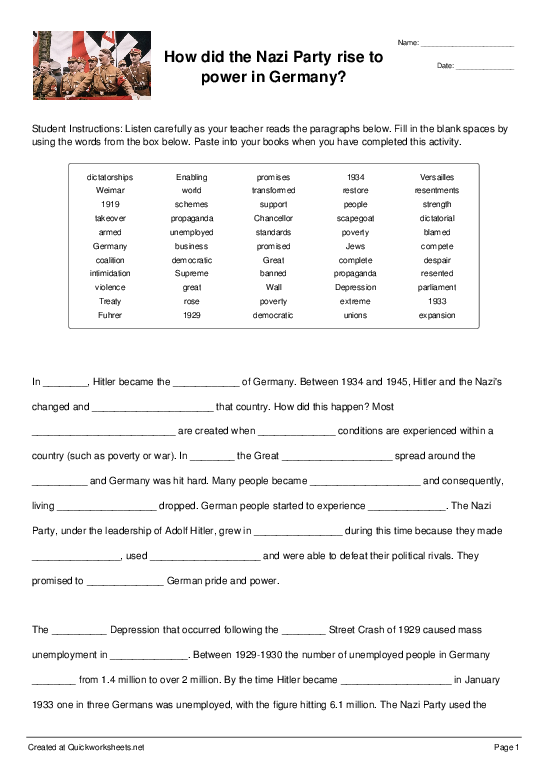 In 1934, Hitler became the Fuhrer of Germany. Between 1934 and 1945, Hitler and the Nazi's changed and transformed that country. How did this happen? Most dictatorships are created when extreme conditions are experienced within a country (such as poverty or war). In 1929 the Great Depression spread around the world and Germany was hit hard. Many people became unemployed and consequently, living standards dropped. German people started to experience poverty. The Nazi Party, under the leadership of Adolf Hitler, grew in strength during this time because they made promises, used propaganda and were able to defeat their political rivals. They promised to restore German pride and power. The Great Depression that occurred following the Wall Street Crash of 1929 caused mass unemployment in Germany. Between 1929-1930 the number of unemployed people in Germany rose from 1.4 million to over 2 million. By the time Hitler became Chancellor in January 1933 one in three Germans was unemployed, with the figure hitting 6.1 million. The Nazi Party used the feelings of despair created by poverty and Germany’s strong pride in its country to gain support. Many Germans resented the conditions imposed on them by the Treaty of Versailles, 1919. Hitler and the Nazis exploited these fears and resentments. They decided that the best way to gain power in Germany was to compete for the support of the people through the democratic process. (Elections) Hitler and the Nazis promised all things to all the groups in Germany that mattered. To big business, they promised to crush trade unions and give them contracts for weapons. To the armed forces, they promised expansion and new weapons. To all the workers they promised jobs in the new businesses or on public work schemes. They promised to reject the terms of the Treaty of Versailles make Germany a great power again. The Nazi's made promises and they used propaganda to spread their message. Nazi propaganda blamed the problems that Germany was facing on the Jews, making the Jews the scapegoat. The Nazis also used violence and intimidation to make people fearful of them. By 1932 the Nazi Party has won enough seats in the German parliament that, when joined by other smaller parties, the Nazi Party coalition became the Government and Hitler became the Chancellor. In 1933 there was another election and this time the Nazi Party won enough seats to be the Government by themselves. As Chancellor of Germany, Hitler passed a law called the Enabling Act, that banned all other political parties. Germany moved from a being democratic system of government (the Weimar Republic) to a dictatorial system. In 1934, following the death of President Von Hindenburg in August, Hitler appointed himself Fuhrer or Supreme Leader of Germany. The Nazi takeover of Germany was now complete.

This worksheet was created by John Bower. History and Social Studies teacher at Lyfield College, 2020.