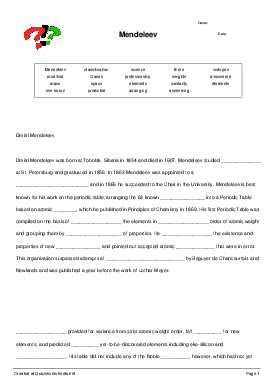 Dmitri Mendeleev Dmitri Mendeleev was born at Tobolsk, Siberia in 1834 and died in 1907. Mendeleev studied science at St. Petersburg and graduated in 1856. In 1863 Mendeleev was appointed to a professorship and in 1866 he succeeded to the Chair in the University. Mendeleev is best known for his work on the periodic table; arranging the 63 known elements into a Periodic Table based on atomic mass, which he published in Principles of Chemistry in 1869. His first Periodic Table was compiled on the basis of arranging the elements in ascending order of atomic weight and grouping them by similarity of properties. He predicted the existence and properties of new elements and pointed out accepted atomic weights that were in error. This organization surpassed attempts at classification by Beguyer de Chancourtois and Newlands and was published a year before the work of Lothar Meyer. Mendeleev provided for variance from strict atomic weight order, left space for new elements, and predicted three yet-to-be-discovered elements including eke-silicon and eke-boron. His table did not include any of the Noble Gases, however, which had not yet been discovered. The original table has been modified and corrected several times, notably by Moseley, but it had accommodated the discovery of isotopes, rare gases, etc.