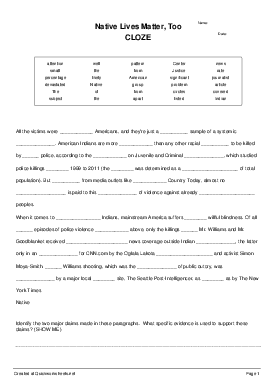 All the victims were Native Americans, and they're just a small sample of a systemic problem. American Indians are more likely than any other racial group to be killed by the police, according to the Center on Juvenile and Criminal Justice, which studied police killings from 1999 to 2011 (the rate was determined as a percentage of total population). But apart from media outlets like Indian Country Today, almost no attention is paid to this pattern of violence against already devastated peoples. When it comes to American Indians, mainstream America suffers from willful blindness. Of all the episodes of police violence listed above, only the killings of Mr. Williams and Mr. Goodblanket received significant news coverage outside Indian circles, the latter only in an article for CNN.com by the Oglala Lakota journalist and activist Simon Moya-Smith. The Williams shooting, which was the subject of public outcry, was covered by a major local news site, The Seattle Post-Intelligencer, as well as by The New York Times Native

Identify the two major claims made in these paragraphs. What specific evidence is used to support these claims? (SHOW ME)