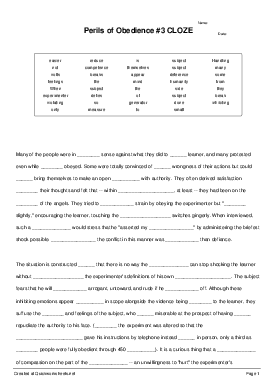 Many of the people were in some sense against what they did to the learner, and many protested even while they obeyed. Some were totally convinced of the wrongness of their actions but could not bring themselves to make an open break with authority. They often derived satisfaction from their thoughts and felt that -- within themselves, at least -- they had been on the side of the angels. They tried to reduce strain by obeying the experimenter but "only slightly," encouraging the learner, touching the generator switches gingerly. When interviewed, such a subject would stress that he "asserted my humanity" by administering the briefest shock possible. Handling the conflict in this manner was easier than defiance. The situation is constructed so that there is no way the subject can stop shocking the learner without violating the experimenter's definitions of his own competence. The subject fears that he will appear arrogant, untoward, and rude if he breaks off. Although these inhibiting emotions appear small in scope alongside the violence being done to the learner, they suffuse the mind and feelings of the subject, who is miserable at the prospect of having to repudiate the authority to his face. (When the experiment was altered so that the experimenter gave his instructions by telephone instead of in person, only a third as many people were fully obedient through 450 volts). It is a curious thing that a measure of compassion on the part of the subject -- an unwillingness to "hurt" the experimenter's feelings -- is part of those binding forces inhibiting his disobedience. The withdrawal of such deference may be as painful to the subject as to the authority he defies.