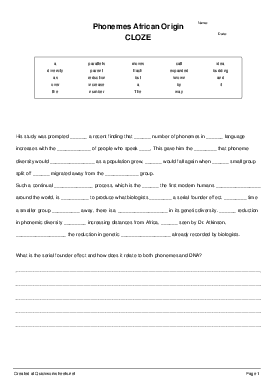 His study was prompted by a recent finding that the number of phonemes in a language increases with the number of people who speak it. This gave him the idea that phoneme diversity would increase as a population grew, but would fall again when a small group split off and migrated away from the parent group. Such a continual budding process, which is the way the first modern humans expanded around the world, is known to produce what biologists call a serial founder effect. Each time a smaller group moves away, there is a reduction in its genetic diversity. The reduction in phonemic diversity over increasing distances from Africa, as seen by Dr. Atkinson, parallels the reduction in genetic diversity already recorded by biologists.

What is the serial founder effect and how does it relate to both phonemes and DNA?