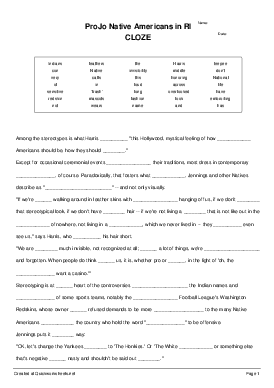 Among the stereotypes is what Harris calls "this Hollywood, mystical feeling of how Native Americans should be, how they should look." Except for occasional ceremonial events honoring their traditions, most dress in contemporary fashion, of course. Paradoxically, that fosters what Harris, Jennings and other Natives describe as "invisibility" -- and not only visually. "If we're not walking around in leather skins with feathers hanging off us, if we don't have that stereotypical look, if we don't have long hair -- if we're not living a life that is not like out in the middle of nowhere, not living in a teepee, which we never lived in -- they don't even see us," says Harris, who wears his hair short. "We are very much invisible, not recognized at all; in a lot of things, we're overlooked and forgotten. When people do think of us, it is, whether pro or con, in the light of 'oh, the Indians want a casino.'" Stereotyping is at the heart of the controversies embroiling the Indian names and mascots of some sports teams, notably the National Football League's Washington Redskins, whose owner has refused demands to be more sensitive to the many Native Americans across the country who hold the word "redskin" to be offensive. Jennings puts it this way: "OK, let's change the Yankees name to 'The Honkies.' Or 'The White Trash' or something else that's negative and nasty and shouldn't be said out loud."