Relationship between Grades and Learning CLOZE #2 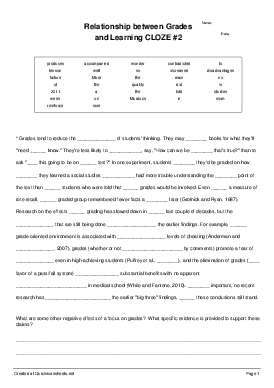 * Grades tend to reduce the quality of students’ thinking. They may skim books for what they’ll “need to know.” They’re less likely to wonder, say, “How can we be sure that’s true?” than to ask “Is this going to be on the test?” In one experiment, students told they’d be graded on how well they learned a social studies lesson had more trouble understanding the main point of the text than did students who were told that no grades would be involved. Even on a measure of rote recall, the graded group remembered fewer facts a week later (Grolnick and Ryan, 1987). Research on the effects of grading has slowed down in the last couple of decades, but the studies that are still being done reinforce the earlier findings. For example, a grade-oriented environment is associated with increased levels of cheating (Anderman and Murdock, 2007), grades (whether or not accompanied by comments) promote a fear of failure even in high-achieving students (Pulfrey et al., 2011), and the elimination of grades (in favor of a pass/fail system) produces substantial benefits with no apparent disadvantages in medical school (White and Fantone, 2010). More important, no recent research has contradicted the earlier “big three” findings, so those conclusions still stand.

What are some other negative effects of a focus on grades? What specific evidence is provided to support these claims?