Student Task: Use the words in the box below to complete the sentences. 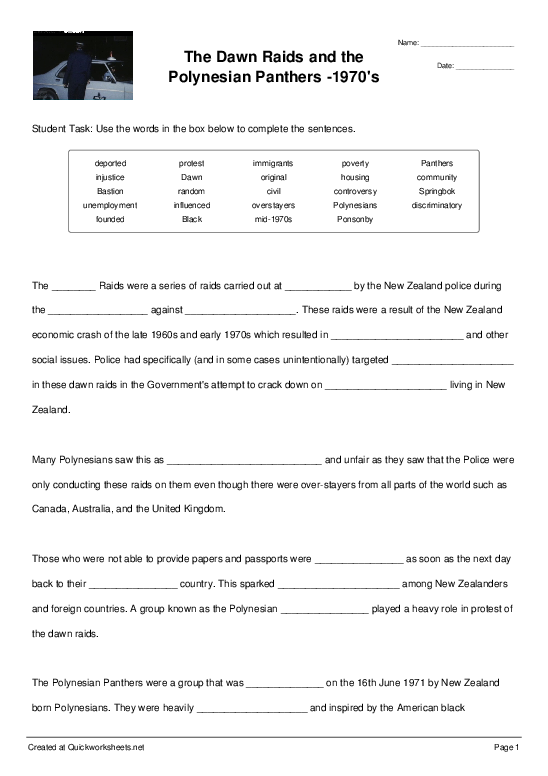 The Dawn Raids were a series of raids carried out at random by the New Zealand police during the mid-1970s against immigrants. These raids were a result of the New Zealand economic crash of the late 1960s and early 1970s which resulted in unemployment and other social issues. Police had specifically (and in some cases unintentionally) targeted Polynesians in these dawn raids in the Government's attempt to crack down on overstayers living in New Zealand. Many Polynesians saw this as discriminatory and unfair as they saw that the Police were only conducting these raids on them even though there were over-stayers from all parts of the world such as Canada, Australia, and the United Kingdom. Those who were not able to provide papers and passports were deported as soon as the next day back to their original country. This sparked controversy among New Zealanders and foreign countries. A group known as the Polynesian Panthers played a heavy role in protest of the dawn raids. The Polynesian Panthers were a group that was founded on the 16th June 1971 by New Zealand born Polynesians. They were heavily influenced and inspired by the American black civil rights group called the "The Black Panthers" and adopted many of their ideas. Members of the group were mostly young adults around the age of 20. with many being ex-gang members. The Panthers mostly operated from their headquarters out in Ponsonby, Central Auckland, and soon spread out down the country as far as Dunedin. The Panthers aimed to help their Polynesian community with issues that they faced such as poor housing conditions, poverty, food packages, prison visits, homework centers, and legal aid. They were also a key group in the protest against the Dawn Raids. After the raids the Panthers worked alongside many other groups like Nga Tamatoa and fight against discrimination and injustice. Some of the protests that they took part in included the Springbok Tour and Bastion Point protest. Source: http://dawnraidsnz.weebly.com/

What are FIVE non violent social actions that people (individuals and groups) can take to on an issue?