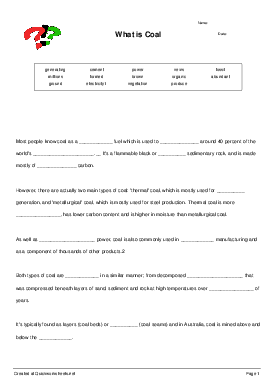 Most people know coal as a fossil fuel which is used to produce around 40 percent of the world's electricity.1 It’s a flammable black or brown sedimentary rock, and is made mostly of organic carbon. However, there are actually two main types of coal: ‘thermal’ coal, which is mostly used for power generation, and ‘metallurgical’ coal, which is mostly used for steel production. Thermal coal is more abundant, has lower carbon content and is higher in moisture than metallurgical coal. As well as generating power, coal is also commonly used in cement manufacturing and as a component of thousands of other products.2 Both types of coal are formed in a similar manner; from decomposed vegetation that was compressed beneath layers of sand, sediment and rock at high temperatures over millions of years. It’s typically found as layers (coal beds) or veins (coal seams) and in Australia, coal is mined above and below the ground.