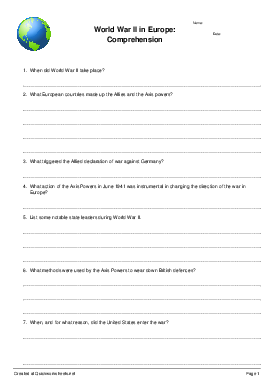 When did World War II take place? 1939 - 1945 What European countries made up the Allies and the Axis powers? Allies: Britain, France, Poland, Yugoslavia, Greece, Norway, Netherlands, Belgium, Czechoslovakia. Axis: Germany, Italy, Hungary, Romania, Bulgaria What triggered the Allied declaration of war against Germany? The German invasion of Poland. What action of the Axis Powers in June 1941 was instrumental in changing the direction of the war in Europe? The invasion of the Soviet Union. List some notable state leaders during World War II. Winston Churchill, Joseph Stalin, Franklin D. Roosevelt, Adolf Hitler, Benito Mussolini, etc. What methods were used by the Axis Powers to wear down British defences? Air bombing campaign (The Battle of Britain), U-boat campaign disrupting Atlantic shipping When, and for what reason, did the United States enter the war? December 1941 - Japanese attack on Pearl Harbor. When was D-Day? 6 June 1944 What happened on D-Day? Allies invaded northern France Following the end of the war, what measures were taken to try and avoid a reoccurrence? Establishment of the United Nations and the Universal Declaration of Human Rights,