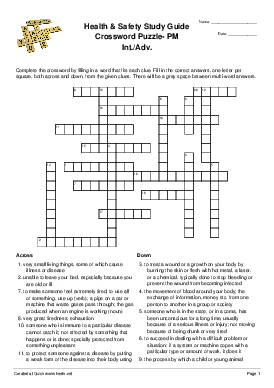 Bacteria very small living things, some of which cause illness or disease Bedridden unable to leave your bed, especially because you are old or ill Cauterize to treat a wound or a growth on your body by burning the skin or flesh with hot metal, a laser, or a chemical, typically done to stop bleeding or prevent the wound from becoming infected Circulation the movement of blood around your body; the exchange of information, money etc. from one person to another in a group or society Comatose someone who is in the state, or in a coma, has been unconscious for a long time, usually because of a serious illness or injury; not moving because of being drunk or very tired Cope to succeed in dealing with a difficult problem or situation: if a system or machine copes with a particular type or amount of work, it does it Exhaust to make someone feel extremely tired; to use all of something, use up (verb); a pipe on a car or machine that waste gases pass through; the gas produced when an engine is working (noun) Fatigue very great tiredness; exhaustion Gestation the process by which a child or young animal develops inside its mother's body before birth, or the period of time when this happens (medical); the process by which a new idea, piece of work etc. is developed, or the period of time when this happens (formal) Immune someone who is immune to a particular disease cannot catch it; not affected by something that happens or is done; specially protected from something unpleasant Inoculate to protect someone against a disease by putting a weak form of the disease into their body using a needle Insomnia inability to obtain sufficient sleep, especially when chronic; difficulty in falling or staying asleep; sleeplessness; if you suffer from insomnia, you are unable to sleep Insulin a substance produced naturally by your body which allows sugar to be used for energy Objective something that you are trying hard to achieve, especially in business or politics: a place that you are trying to reach, especially in a military attack (noun): based on facts, or making a decision that is based on facts rather than on your feelings or beliefs ≠ subjective Pancreas a gland inside your body, near your stomach, that produces insulin and a liquid that helps your body to use the food that you eat Schedule a plan of what someone is going to do and when they are going to do it; a list that shows the times that buses, trains etc. leave or arrive at a particular place (noun): to plan that something will happen at a particular time (verb) Stress continuous feelings of worry about your work or personal life that prevent you from relaxing, strain; the physical force or pressure on an object; the special attention or importance given to a particular idea, fact, or activity, emphasis; the degree of force or loudness with which a part of a word is pronounced or a note in music is played, which makes it sound stronger than other parts or notes (noun) Symptom something wrong with your body or mind which shows that you have a particular illness; a sign that a serious problem exists Transfusion the process of putting blood from one person's body into the body of someone else as a medical treatment; the process of giving something important or necessary, such as money, to a group or organization that needs it Virus a very small living thing that causes infectious illnesses; a set of instructions secretly put onto a computer or computer program, which can destroy information