Complete the crossword by filling in a word that fits each clue. Fill in the correct answers, one letter per square,both across and down, from the given clues. In multi-word answers leave a space between each word. 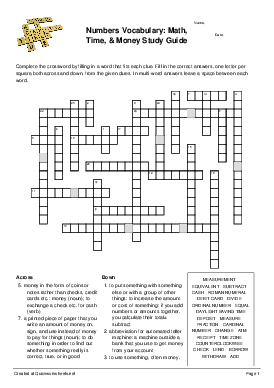 Add to put something with something else or with a group of other things: to increase the amount or cost of something: if you add numbers or amounts together, you calculate their total≠ subtract ATM abbreviation for automated teller machine: a machine outside a bank that you use to get money from your account Borrow to use something, often money, that belongs to someone else and that you must give back to them later: to take or copy someone's ideas, words etc and use them in your own work, language etc.≠lend, loan Cardinal Number a number such as 1, 2, or 3, that shows how many of something there are, but not what order they are in ≠ Ordinal Number Cash money in the form of coins or notes rather than checks, credit cards etc.: money (noun); to exchange a check etc. for cash (verb) Change the money that you get back when you have paid for something with more money than it costs: money in the form of coins, not paper money (noun); to become different, or to make something become different: to take off your clothes and put on different ones (verb) Check a printed piece of paper that you write an amount of money on, sign, and use instead of money to pay for things (noun); to do something in order to find out whether something really is correct, true, or in good condition: to make a mark (✓) next to an answer, something on a list etc. to show you have chosen it, that it is correct, or that you have dealt with it (verb) Clockwise in the same direction as the hands of a clock move ≠ counterclockwise Counterclockwise in the opposite direction to the way in which the hands of a clock move around: anticlockwise ≠ counterclockwise Daylight Saving Time the time during the summer when clocks are one hour ahead of standard time: daylight savings Debit Card a plastic card with your signature on it, that resembles a credit card, but functions like a check and through which payments for purchases or services are made electronically to pay for things, the money is taken directly from your bank account Deposit a part of the cost of something you are buying that you pay some time before you pay the rest of it: money that you pay when you rent something such as an apartment or car, which will be given back if you do not damage it: an amount of money that is paid into a bank account ≠ withdrawal (noun); to put money or something valuable in a bank or other place where it will be safe: to put something down in a particular place (verb) Divide if something divides, or if you divide it, it separates into two or more parts: to keep two areas separate from each other: to calculate how many times one number contains a smaller number: to make people disagree so that they form groups with different opinions Equal the same in size, number, amount, value etc. as something else: equivalent: having the same rights, opportunities etc. as everyone else, whatever your race, religion, or sex Equivalent having the same value, purpose, job etc. as a person or thing of a different kind (adj.): something that has the same value, purpose, job etc. as something else; something that is equal in value, amount, quality etc. to something else (noun) Fraction a very small amount of something: a part of a whole number in mathematics, such as ½ or ¾ Lend to let someone borrow money or something that belongs to you for a short time: if a bank or financial institution lends money, it lets someone have it on condition that they pay it back later, often gradually, with an additional amount as interest ≠borrow Measure to find the size, length, or amount of something, using standard units such as inches, meters etc.: to judge the importance, value, or true nature of something: if a piece of equipment measures something, it shows or records a particular kind of measurement Measurement the length, height etc. of something: the act of measuring something Ordinal Number one of the numbers such as first, second, third etc. which show the order of things ≠ Cardinal Number Receipt a piece of paper that you are given which shows that you have paid for something: when someone receives something Roman Numeral a number in a system first used in ancient Rome that uses combinations of the letters I, V, X, L, C, D, and M to represent numbers ≠ Arabic numeral Subtract to take a number or an amount from a larger number or amount: deduct, minus Time Zone one of the 24 areas that the world is divided into, each of which has its own time Withdraw to take money out of a bank account: to stop taking part in an activity, belonging to an organization etc., or to make someone do this