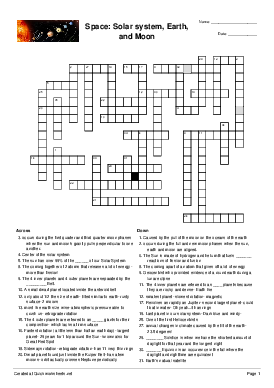 Tides Caused by the pull of the moon on the oceans of the earth Spring Tide occurs during the full and new moon phases when the sun, earth and moon are aligned. Neap Tide occurs during the first quarter and third quarter moon phases when the sun and moon’s gravity pulls perpendicular to one another. Sun Center of the solar system Mass The sun has over 99% of the ______ of our Solar System Nuclear The Sun is made of hydrogen and helium that fuels _______ reactions of fission and fusion Fission The coming apart of an atom that gives off a lot of energy Fusion The coming together of 2 atoms that releases a lot of energy - more than fission! Asteroid The 4 inner planets and 4 outer planets are separated by the _________ Belt. Ceres A small dwarf planet located inside the asteroid belt Terrestrial The 4 inner planets are referred to as ____ planets because they are rocky and dense- Earth like Mercury smallest planet- slowest rotation- magnetic Venus most like earth size wise- atmospheric pressure able to crush us- retrograde rotation Mars only about 1/2 the size of earth- tilted similar to earth- rusty surface- 2 moons Gas The 4 outer planets are referred to as _____ giants for their composition- which lacks a firm surface Jupiter Fastest rotation (a little less than half an earth day)- largest planet- 29 years for 1 trip around the Sun- known also for Great Red Spot Saturn Revolves as rapidly as Jupiter- second largest planet- could float in water- Oh yeah...it has rings Uranus Sideways rotation- retrograde rotation- has 11 very thin rings Neptune Last planet in our solar system- Dark blue and windy- Pluto Dwarf planet found just inside the Kuiper Belt- has a few moons- orbit actually crosses Neptune periodically Geocentric The ancient idea that the earth is/was at the center of the space system Heliocentric The sun is at the center of the space system Ptolemy Geocentrist who worked out planet orbits Aristotle Geocentrist who provided evidence of a round earth during a lunar eclipse Copernicus, One of the first Heliocentrists Galileo, Heliocentrist with a telescope- house arrest for discoveries Seasons, annual changes in climate caused by the tilt of the earth- 23.5 degrees! Summer ________ Solstice is when we have the longest amount of daylight for that year and the shortest night Winter ________ Solstice is when we have the shortest amount of daylight for that year and the longest night Autumnal _______ Equinox is an occurrence in the fall where the daylight and nighttime are equivalent Moon Earth’s natural satellite Phases The way we see the moon as it orbits around the sun and reflects the Sun’s light Waxing the amount of moon that you can see is increasing Waning the amount of moon that you can see is decreasing Lunar During a _______ Eclipse the shadow of the earth goes across the face of the moon Solar During a _______ Eclipse the shadow of the moon goes across the Earth