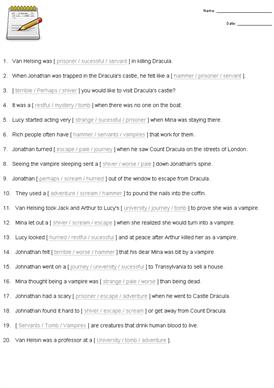 Van Helsing was sucessful in killing Dracula. When Jonathan was trapped in the Dracula's castle, he felt like a prisoner. Perhaps you would like to visit Dracula's castle? It was a mystery when there was no one on the boat. Lucy started acting very strange when Mina was staying there. Rich people often have servants that work for them. Jonathan turned pale when he saw Count Dracula on the streets of London. Seeing the vampire sleeping sent a shiver down Jonathan's spine. Jonathan hurried out of the window to escape from Dracula. They used a hammer to pound the nails into the coffin. Van Helsing took Jack and Arthur to Lucy's tomb to prove she was a vampire. Mina let out a scream when she realized she would turn into a vampire. Lucy looked restful and at peace after Arthur killed her as a vampire. Johnathan felt terrible that his dear Mina was bit by a vampire. Johnathan went on a journey to Transylvania to sell a house. Mina thought being a vampire was worse than being dead. Johnathan had a scary adventure when he went to Castle Dracula. Johnathan found it hard to escape or get away from Count Dracula. Vampires are creatures that drink human blood to live. Van Helsin was a professor at a University.