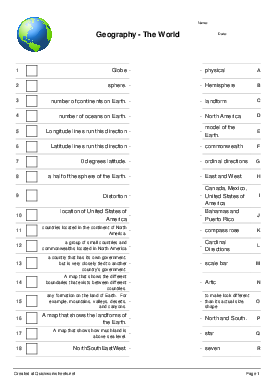 Globe model of the Earth. sphere. the shape of the earth number of continents on Earth. seven number of oceans on Earth. five Longitude lines run this direction North and South. Latitude lines run this direction East and West. 0 degrees latitude. Equator a half of the sphere of the Earth. Hemisphere Distortion to make look different than its actual size, shape location of United States of America North America countries located in the continent of North America. Canada, Mexico, United States of America a group of small countries and commonwealths located in North America Caribbean a country that has its own government, but is very closely tied to another country's government. commonwealth A map that shows the different boundaries that exists between different countries. political any formation on the land of Earth. For example, mountains, valleys, deserts, and canyons. landform A map that shows the landforms of the Earth. physical A map that shows how much land is above sea level. elevation NorthSouthEastWest. Cardinal Directions Symbol often used to show where a capital of a country is located. star used to help you identify directions on a map. compass rose the guide that tells you what a number of symbols mean on a map. legend used on a map the measure distance. scale bar Northwest, Northeast, Southwest, Southeast. ordinal directions Commonwealths of the United States Bahamas and Puerto Rico Ocean Artic Continent Africa