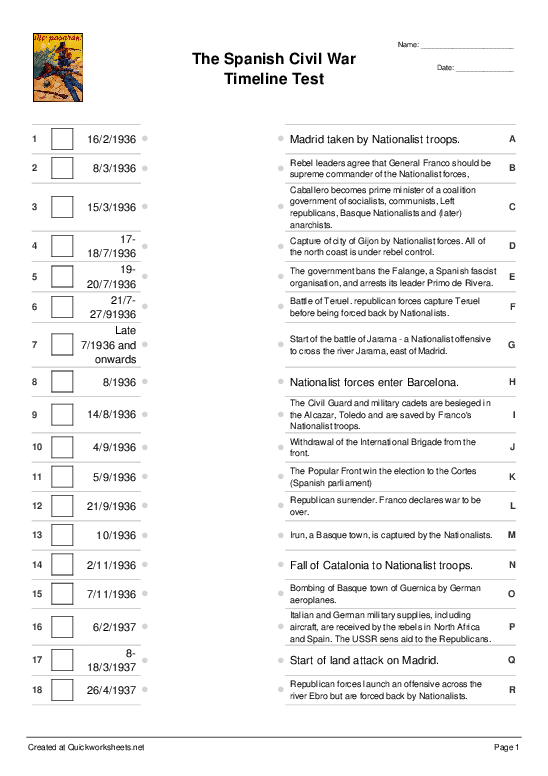 16/2/1936 The Popular Front win the election to the Cortes (Spanish parliament) 8/3/1936 General Mola, General Franco and other army officers meet in Madrid to discuss a military coup against the Popular Front government. 15/3/1936 The government bans the Falange, a Spanish fascist organisation, and arrests its leader Primo de Rivera. 17-18/7/1936 Start of military rebellion against the Spanish government, first in North Africa and then in mainland Spain. 19-20/7/1936 The military uprising is defeated in Madrid and Barcelona, but large parts of Spain come under the control of the rebels. 21/7-27/91936 The Civil Guard and military cadets are besieged in the Alcazar, Toledo and are saved by Franco's Nationalist troops. Late 7/1936 and onwards Italian and German military supplies, including aircraft, are received by the rebels in North Africa and Spain. The USSR sens aid to the Republicans. 8/1936 France and Great Britain propose a policy of non intervention, which is agreed to by by Germany, Portugal, the USSR and Italy. 14/8/1936 Nationalists capture the city of Badajoz. 2000-4000 civilians are massacred by Spanish Moroccan troops. 4/9/1936 Caballero becomes prime minister of a coalition government of socialists, communists, Left republicans, Basque Nationalists and (later) anarchists. 5/9/1936 Irun, a Basque town, is captured by the Nationalists. 21/9/1936 Rebel leaders agree that General Franco should be supreme commander of the Nationalist forces, 10/1936 First International Brigades are formed: foreign volunteers fighting on the side of the Republican government. 2/11/1936 Nationalist troops capture the town of Brunette, west of Madrid. 7/11/1936 Start of land attack on Madrid. 6/2/1937 Start of the battle of Jarama - a Nationalist offensive to cross the river Jarama, east of Madrid. 8-18/3/1937 Nationalists troops launch an offensive northeast of Madrid: Battle of Guadalajara 26/4/1937 Bombing of Basque town of Guernica by German aeroplanes. 3-8/5/1937 Divisions between different factions of the Republican Government result in street fighting in Barcelona. 1/7/1937 Franco is endorsed as legitimate ruler of Spain by Spanish bishops (Catholic church) 21/10/1937 Capture of city of Gijon by Nationalist forces. All of the north coast is under rebel control. 12/1937- 2/1938 Battle of Teruel. republican forces capture Teruel before being forced back by Nationalists. 25/7- 16/11/1938 Republican forces launch an offensive across the river Ebro but are forced back by Nationalists. 4/10/1938 Withdrawal of the International Brigade from the front. 26/1/1939 Nationalist forces enter Barcelona. 10/2/1939 Fall of Catalonia to Nationalist troops. 28/3/1939 Madrid taken by Nationalist troops. 1/4/1939 Republican surrender. Franco declares war to be over.

Reviewing the timeline write a brief review of the Spanish Civil War. What do the events tell you about the Nationalist strategy? Why do you think the Republicans lost the war?