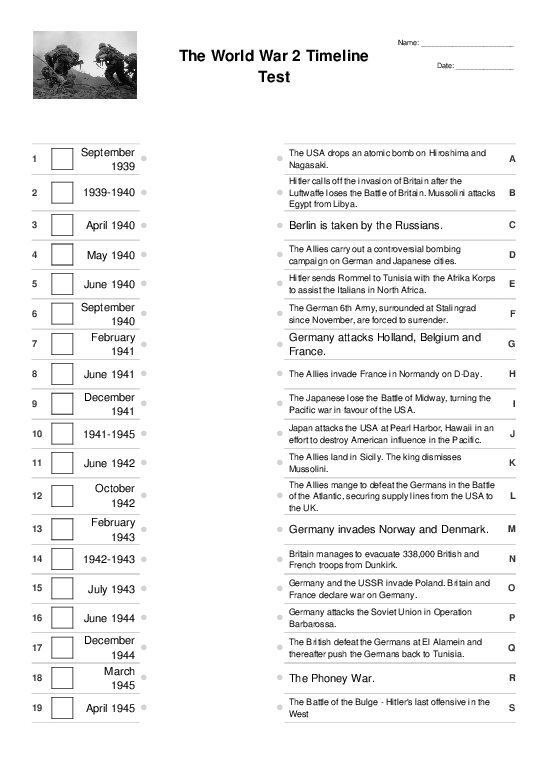 September 1939 Germany and the USSR invade Poland. Britain and France declare war on Germany. 1939-1940 The Phoney War. April 1940 Germany invades Norway and Denmark. May 1940 Germany attacks Holland, Belgium and France. June 1940 Britain manages to evacuate 338,000 British and French troops from Dunkirk. September 1940 Hitler calls off the invasion of Britain after the Luftwaffe loses the Battle of Britain. Mussolini attacks Egypt from Libya. February 1941 Hitler sends Rommel to Tunisia with the Afrika Korps to assist the Italians in North Africa. June 1941 Germany attacks the Soviet Union in Operation Barbarossa. December 1941 Japan attacks the USA at Pearl Harbor, Hawaii in an effort to destroy American influence in the Pacific. 1941-1945 The Allies carry out a controversial bombing campaign on German and Japanese cities. June 1942 The Japanese lose the Battle of Midway, turning the Pacific war in favour of the USA. October 1942 The British defeat the Germans at El Alamein and thereafter push the Germans back to Tunisia. February 1943 The German 6th Army, surrounded at Stalingrad since November, are forced to surrender. 1942-1943 The Allies mange to defeat the Germans in the Battle of the Atlantic, securing supply lines from the USA to the UK. July 1943 The Allies land in Sicily. The king dismisses Mussolini. June 1944 The Allies invade France in Normandy on D-Day. December 1944 The Battle of the Bulge - Hitler's last offensive in the West March 1945 The British and the Americans cross the Rhine into Germany. April 1945 Berlin is taken by the Russians. August 1945 The USA drops an atomic bomb on Hiroshima and Nagasaki.

Why did the Axis powers lose WW2?