Take your time, think about your answers and respond with thought-out answers. Love MOM! 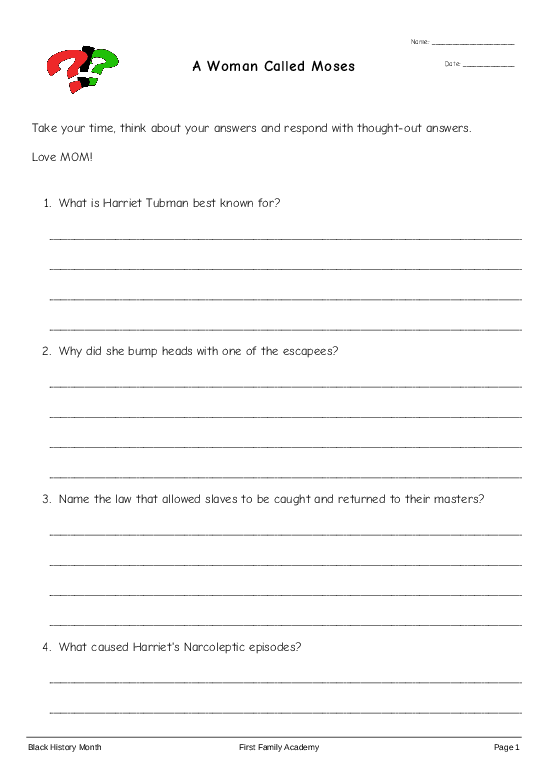 What is Harriet Tubman best known for? She is known for helping with women rights and helping slaves escape. Why did she bump heads with one of the escapees? He was angry about something that happened when they were kids and he didn't believe she knew where she was going. Name the law that allowed slaves to be caught and returned to their masters? Fugitive Slave Act What caused Harriet's Narcoleptic episodes? Being hit with a weight What part of the movie caught your attention and why? Various answers When slave catchers caught up with Harriet Tubman what happened? they were thrown off and the leader jumped off allowing Harriet to continue on her way Who is one of the earliest people known to help fugitive slaves and how old were they? Levi Coffin and he was 15 years old How did John Tubman pay for his freedom? He stole Harriet's money she saved up for her own freedom How long did John leave Harriet and why did he leave? As Harriet Tubman, got dressed and ready to head out to buy her freedom what happened? Be precise. She was instructed to pull a wagon like a mule while whites looked on and laughed When she ran to her slave master to buy her freedom what did he tell her? He wouldn't sell her for 1,000 dollars she was to valuable to him Her master fired his slave handler why? he didn't not believe in brutalizing slaves just punishing them Why did Harriet Tubman decide to run away when she fled to Philadelphia? her master died and she feared being sold off When she returned to Maryland for John Tubman what happened? John had remarried and did not want to leave What was one of the escapees worried about? he was worried about being returned and separated from his woman