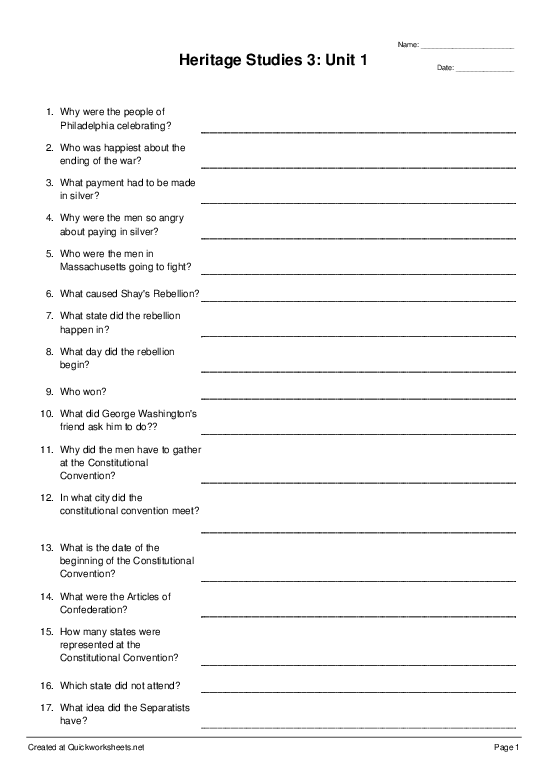 Why were the people of Philadelphia celebrating? The redcoats had given up, and America was free of kings. Who was happiest about the ending of the war? George Washington What payment had to be made in silver? taxes Why were the men so angry about paying in silver? Silver coins were more valuable, and nearly impossible to get. Who were the men in Massachusetts going to fight? Their own leaders. What caused Shay's Rebellion? The men rebelled because they were angry about the taxes and paying in silver. What state did the rebellion happen in? Massachusetts What day did the rebellion begin? January 25, 1787 Who won? The governor's army, or the state of Massachusetts. What did George Washington's friend ask him to do?? Leave his home and to help start a new government. Why did the men have to gather at the Constitutional Convention? To start a new country and to write new laws. In what city did the constitutional convention meet? Philadelphia What is the date of the beginning of the Constitutional Convention? May 25, 1787 What were the Articles of Confederation? Rules to help keep the colonies together. How many states were represented at the Constitutional Convention? 12 Which state did not attend? Rhode Island What idea did the Separatists have? That they needed to worship God as they believed. What was the Mayflower Compact? Rules the Separatists made in the New World. Did the Separatists believe that rules were important? Yes. When were the Articles of Confederation used? During the war.