Japan: The Road To Global War 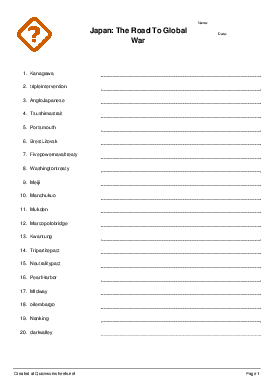 Kanagawa Treaty to open up trade between USA and Japan in 1871 (7) tripleintervention Germany, France and Russia force Japan to surrender the Liaodong Peninsula after the 1st Sino-Japanese war (6/12) AngloJapanese First ever ailiance between an Asian and European power, ending Japan's isolation(5/8) Tsushimastrait The Japanese destroyed the Russian fleet in this sea battle.(8/6) Portsmouth Treaty between Russia and japan after the Russo-Japanese war (10) BrestLitovsk Treaty between Russia and Germany, allowing Russia to withdraw from the First World War (6/7) Fivepowernavaltreaty Treaty aimed at limiting naval power that obliged Japan's navy to abandon its plans for expansion.(4/5/5/6) Washingtontreaty A system of treaties: the four-power, the five power naval treaty and the nine-power treaty. (10/6) Meiji New restructured government in Japan (5) Manchukuo Japanese puppet state created after the Manchurian crisis (8) Mukden Incident that gave Japan a reason for invading Manchuria (6) Marcopolobridge Incident that gave Japan a pretext for attacking China (5/4/6) Kwantung Name of the Japanese army that operated independently of the government in Japan (8) Tripartitepact Treaty between Germany, Japan and Italy (10/4) Neutralitypact Non.-aggeression pact between the USSR and Japan signed in 1941 (10/4) PearlHarbor Surpise attack on US Pacific fleet in December 1941 (5/6) MIdway Sea battle in which the US destroyed the Japanese aircraft carrier fleet (6) oilembargo US decision to stop supplying Japan with fuel (3/7) Nanking Massacre when the Japanese conquered a Chinese city that shocked the world (7) darkvalley term to denote the period from the military take-over of pwer in Japan to the end of the Second World War (4/5)