Answer the questions from the article Shenzhou. http://www.astronautix.com/s/shenzhou.html 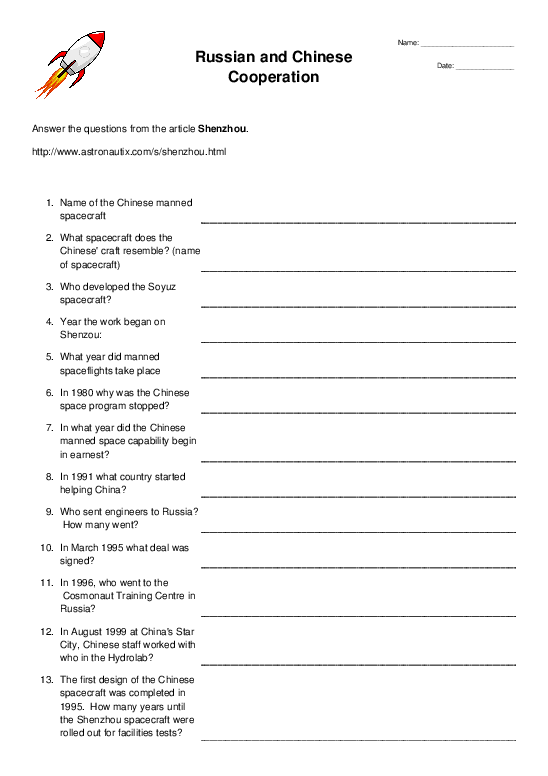 Name of the Chinese manned spacecraft Shenzhou What spacecraft does the Chinese' craft resemble? (name of spacecraft) Soyuz Who developed the Soyuz spacecraft? Russia / Soviet Union Year the work began on Shenzou: 1992 What year did manned spaceflights take place 2003 In 1980 why was the Chinese space program stopped? Cost / Too expensive In what year did the Chinese manned space capability begin in earnest? 1992 In 1991 what country started helping China? Russia Who sent engineers to Russia? How many went? China / 20 In March 1995 what deal was signed? Russia gave manned spacecraft technology to China In 1996, who went to the Cosmonaut Training Centre in Russia? two Chinese astronauts, Wu Jie and Li Qinglong In August 1999 at China's Star City, Chinese staff worked with who in the Hydrolab? Russian Air Force Personnel The first design of the Chinese spacecraft was completed in 1995. How many years until the Shenzhou spacecraft were rolled out for facilities tests? 3 years Shenzhou' is roughly translated as Vessel of the Gods,'Divine Craft', 'Divine Mechanism'; but also a play on a name for China in October 2003 what was the estimated cost of China's manned space program? $2.3 billion When the Shenzou was finally revealed, it closely resembled what? the Russian Soyuz spacecraft

In 4 - 5 sentences, give your thoughts on the Russian and Chinese cooperation. Is such cooperation between nations positive? Is this something the US should be concerend with and why?