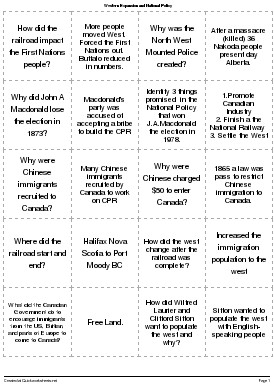 How did the railroad impact the First Nations people? More people moved West. Forced the First Nations out. Buffalo reduced in numbers. Why was the North West Mounted Police created? After a massacre (killed) 36 Nakoda people present day Alberta. Why did John A Macdonald lose the election in 1873? Macdonald's party was accused of accepting a bribe to build the CPR Identify 3 things promised in the National Policy that won J.A.Macdonald the election in 1978. 1.Promote Canadian Industry 2. Finish a the National Railway 3. Settle the West Why were Chinese immigrants recruited to Canada? Many Chinese immigrants recruited by Canada to work on CPR Why were Chinese charged $50 to enter Canada? 1865 a law was pass to restrict Chinese immigration to Canada. Where did the railroad start and end? Halifax Nova Scotia to Port Moody BC How did the west change after the railroad was complete? Increased the immigration population to the west What did the Canadian Government do to encourage immigrants from the US, Britian, and parts of Europe to come to Canada? Free Land. How did Wilfred Laurier and Clifford Sifton want to populate the west and why? Sifton wanted to populate the west with English-speaking people