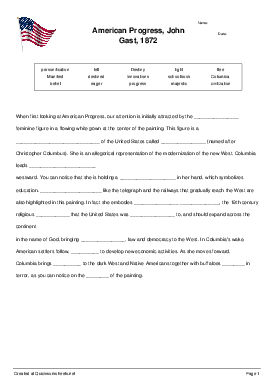 When first looking at American Progress, our attention is initially attracted by the majestic feminine figure in a flowing white gown at the center of the painting. This figure is a personification of the United States called Columbia (named after Christopher Columbus). She is an allegorical representation of the modernization of the new West. Columbia leads civilization westward. You can notice that she is holding a schoolbook in her hand, which symbolizes education. Innovations like the telegraph and the railways that gradually reach the West are also highlighted in this painting. In fact she embodies Manifest Destiny, the 19th century religious belief that the United States was destined to, and should expand across the continent in the name of God, bringing progress, law and democracy to the West. In Columbia's wake, American settlers follow, eager to develop new economic activities. As she moves forward, Columbia brings light to the dark West and Native Americans together with buffaloes flee in terror, as you can notice on the left of the painting.

Study the painting before doing this exercise