Arguments for and against gun control

Use the words in the box to complete this Cloze Activity 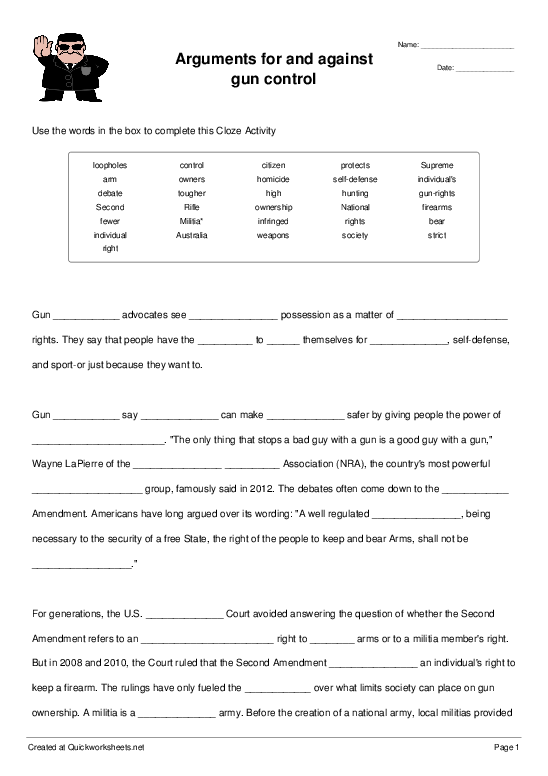 Gun rights advocates see firearms possession as a matter of individual rights. They say that people have the right to arm themselves for hunting, self-defense, and sport—or just because they want to. Gun owners say weapons can make society safer by giving people the power of self-defense. “The only thing that stops a bad guy with a gun is a good guy with a gun,” Wayne LaPierre of the National Rifle Association (NRA), the country’s most powerful gun-rights group, famously said in 2012. The debates often come down to the Second Amendment. Americans have long argued over its wording: “A well regulated Militia*, being necessary to the security of a free State, the right of the people to keep and bear Arms, shall not be infringed.” For generations, the U.S. Supreme Court avoided answering the question of whether the Second Amendment refers to an individual’s right to bear arms or to a militia member’s right. But in 2008 and 2010, the Court ruled that the Second Amendment protects an individual’s right to keep a firearm. The rulings have only fueled the debate over what limits society can place on gun ownership. A militia is a citizen army. Before the creation of a national army, local militias provided protection for many Americans. People who favor gun control say that the more people who carry weapons, the more likely it is that someone will use one to kill. They cite figures that equate high rates of gun ownership with more gun violence. Source: https://junior.scholastic.com/issues/2017-18/112017/guns-in-america.html#1200L According to a 2007 report, there were 89 guns per 100 people in the U.S., more than in any other country. (Yemen, second on the list, had 55 guns per 100 people.) Yet gun-related homicide rates are more than 25 times higher in the U.S. than in any other high-income country. Supporters say tougher laws in other countries keep gun deaths down. Australia, for example, had 13 mass shootings from 1979 to 1996. After a gunman killed 35 people in 1996, the country passed strict laws banning many weapons. It hasn’t had a mass shooting since. Gun control advocates say closing gun control loopholes would still allow law-abiding people to have firearms, while resulting in far fewer deaths.

Describe either a Liberal of Conservative response to the issue of gun rights vs gun control in the USA.