Fill in the blank using "The Americans" textbook and pages 447-450 11.2.5 Discuss corporate mergers that produced trusts and cartels and the economic andpolitical policies of industrial leaders. 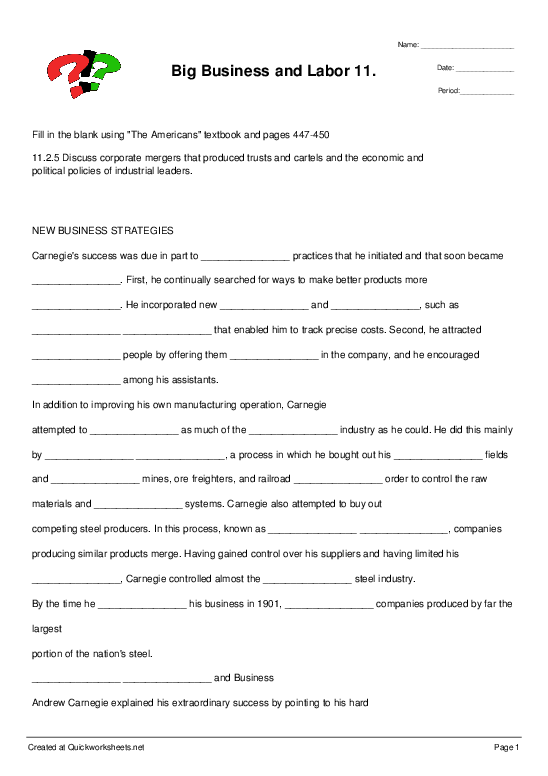 NEW BUSINESS STRATEGIES Carnegie’s success was due in part to management practices that he initiated and that soon became widespread. First, he continually searched for ways to make better products more cheaply. He incorporated new machinery and techniques, such as accounting systems that enabled him to track precise costs. Second, he attracted talented people by offering them stock in the company, and he encouraged competition among his assistants. In addition to improving his own manufacturing operation, Carnegie attempted to control as much of the steel industry as he could. He did this mainly by vertical integration, a process in which he bought out his suppliers—coal fields and iron mines, ore freighters, and railroad lines—in order to control the raw materials and transportation systems. Carnegie also attempted to buy out competing steel producers. In this process, known as horizontal integration, companies producing similar products merge. Having gained control over his suppliers and having limited his competition, Carnegie controlled almost the entire steel industry. By the time he sold his business in 1901, Carnegie’s companies produced by far the largest portion of the nation’s steel. Social Darwinism and Business Andrew Carnegie explained his extraordinary success by pointing to his hard work, shrewd investments, and innovative business practices. Late-19th-century social philosophers thought that Carnegie’s achievement could be explained scientifically by a new theory—Social Darwinism. PRINCIPLES OF SOCIAL DARWINISM The philosophy called Social Darwinism grew out of the English naturalist Charles Darwin’s theory of biological evolution. In his book On the Origin of Species, published in 1859, Darwin described his observations that some individuals of a species flourish and pass their traits along to the next generation, while others do not. He explained that a process of “natural selection” weeded out less-suited individuals and enabled the best-adapted to survive. The English philosopher Herbert Spencer used Darwin’s biological theories to explain the evolution of human society. Soon, economists found in Social Darwinism a way to justify the doctrine of laissez faire (a French term meaning “allow to do”). According to this doctrine, the marketplace should notbe regulated. William G. Sumner, a political science professor at Yale University, promoted the theory that success and failure in business were governed by natural law and that no one had the right to intervene. ROCKEFELLER AND THE “ROBBER BARONS” In 1870, Rockefeller’s Standard Oil Company of Ohio processed two or three percent of the country’s crude oil. Within a decade, it controlled 90 percent of the refining business. Rockefeller reaped huge profits by paying his employees extremely low wages and driving his competitors out of business by selling his oil at a lower price than it cost to produce it. Then, when he controlled the market, he hiked prices far above original levels. Alarmed at the tactics of industrialists, critics began to call them robber barons. But industrialists were also philanthropists. Although Rockefeller kept most of his assets, he still gave away over $500 million, establishing the Rockefeller Foundation, providing funds to found the University of Chicago, and creating a medical institute that helped find a cure for yellow fever. SHERMAN ANTITRUST ACT Despite Carnegie’s defense of millionaires, the government was concerned that expanding corporations would stifle free competition. In 1890, the Sherman Antitrust Act made it illegal to form a trust that interfered with free trade between states or with other countries. Prosecuting companies under the Sherman act was not easy, however, because the act didn’t clearly define terms such as trust. In addition, if firms such as Standard Oil felt pressure from the government, they simply reorganized into single corporations. The Supreme Court threw out seven of the eight cases the federal government brought against trusts. Eventually, the government stopped trying to enforce the Sherman act, and the consolidation of businesses continued.