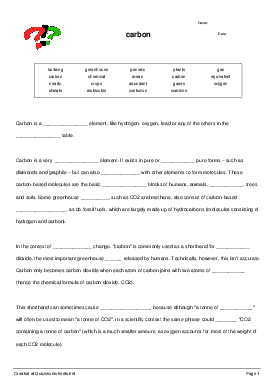 Carbon is a chemical element, like hydrogen, oxygen, lead or any of the others in the periodic table. Carbon is a very abundant element. It exists in pure or nearly pure forms – such as diamonds and graphite – but can also combine with other elements to form molecules. These carbon-based molecules are the basic building blocks of humans, animals, plants, trees and soils. Some greenhouse gases, such as CO2 and methane, also consist of carbon-based molecules, as do fossil fuels, which are largely made up of hydrocarbons (molecules consisting of hydrogen and carbon). In the context of climate change, "carbon" is commonly used as a shorthand for carbon dioxide, the most important greenhouse gas released by humans. Technically, however, this isn't accurate. Carbon only becomes carbon dioxide when each atom of carbon joins with two atoms of oxygen (hence the chemical formula of carbon dioxide, CO2). This shorthand can sometimes cause confusion, because although "a tonne of carbon" will often be used to mean "a tonne of CO2", in a scientific context the same phrase could mean "CO2 containing a tonne of carbon" (which is a much smaller amount, as oxygen accounts for most of the weight of each CO2 molecule). The term carbon also crops up in the phrase carbon footprint, which describes the total amount of greenhouse gases released as the result of a given activity. In this context, "a tonne of carbon" may mean something else still: "a mix of greenhouse gases with a combined warming impact equivalent to that of a tonne of CO2". Carbon molecules move around the Earth system in the carbon cycle