Choose the correct prefix for the root word. Remember to read the passage when done to make sure all the words make sense in the story. 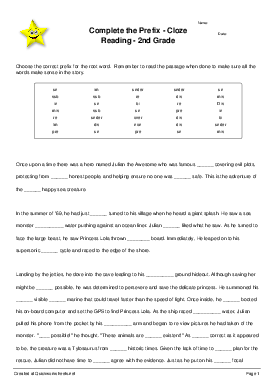 Once upon a time there was a hero named Julian the Awesome who was famous un covering evil plots, protecting from dis honest people, and helping ensure no one was un safe. This is the adventure of the un happy sea creature. In the summer of '69, he had just re turned to his village when he heard a giant splash. He saw a sea monster under water pushing against an ocean liner. Julian dis liked what he saw. As he turned to face the large beast, he saw Princess Lola thrown over board. Immediately, He leaped on to his supersonic bi cycle and raced to the edge of the shore. Landing by the jetties, he dove into the cave leading to his under ground hideout. Although saving her might be im possible, he was determined to persevere and save the delicate princess. He summoned his in visible sub marine that could travel faster than the speed of light. Once inside, he re booted his on-board computer and set the GPS to find Princess Lola. As the ship raced under water, Julian pulled his phone from the pocket by his under arm and began to re view pictures he had taken of the monster. "Im possible!" he thought. "These animals are non existent!" As in correct as it appeared to be, the creature was a Tylosaurus from pre historic times. Given the lack of time to pre plan for the rescue, Julian did not have time to dis agree with the evidence. Just as he put on his bi focal glasses and began to re search how to turn the monster into a zillion sub atomic particles, its tail slashed at the boat. The computer dis connected, but there was no need to re set the internet as Julian had already un covered the secret to winning this battle. With great pre caution, he turned on the sub woofer of his stereo to play his favorite Katy Perry song. Unless he mis understood what he had read, this fish larger than Washington D.C. would not mis behave if he heard the loud thumping of dinosaurs ---- a sound that the music could mimic. Dis honest, yes. But it was okay to mis lead the beast in his quest to save Princess Lola. As history tells us, Julian the Awesome rescued Princess Lola as the un happy Tylosaurus, un able to stay for fear of dinsoaurs, swam back out into the Ocean. THE END