Complete the passage below using the box of words provided - you can use each more than once if you need to. 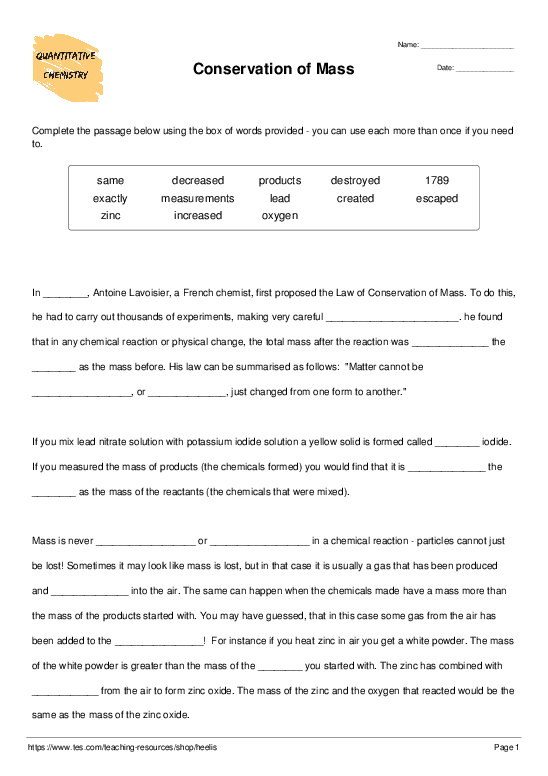 In 1789, Antoine Lavoisier, a French chemist, first proposed the Law of Conservation of Mass. To do this, he had to carry out thousands of experiments, making very careful measurements. he found that in any chemical reaction or physical change, the total mass after the reaction was exactly the same as the mass before. His law can be summarised as follows: "Matter cannot be destroyed, or created, just changed from one form to another." If you mix lead nitrate solution with potassium iodide solution a yellow solid is formed called lead iodide. If you measured the mass of products (the chemicals formed) you would find that it is exactly the same as the mass of the reactants (the chemicals that were mixed). Mass is never increased or decreased in a chemical reaction - particles cannot just be lost! Sometimes it may look like mass is lost, but in that case it is usually a gas that has been produced and escaped into the air. The same can happen when the chemicals made have a mass more than the mass of the products started with. You may have guessed, that in this case some gas from the air has been added to the products! For instance if you heat zinc in air you get a white powder. The mass of the white powder is greater than the mass of the zinc you started with. The zinc has combined with oxygen from the air to form zinc oxide. The mass of the zinc and the oxygen that reacted would be the same as the mass of the zinc oxide.