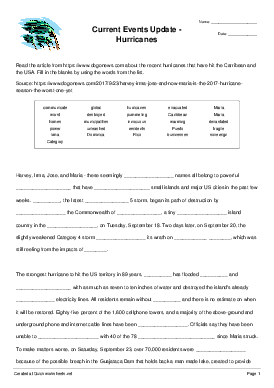 Harvey, Irma, Jose, and Maria — these seemingly innocuous names all belong to powerful hurricanes that have devastated small islands and major US cities in the past few weeks. Maria, the latest Category 5 storm, began its path of destruction by pummeling the Commonwealth of Dominica, a tiny sovereign island country in the Caribbean, on Tuesday, September 18. Two days later, on September 20, the slightly weakened Category 4 storm unleashed its wrath on Puerto Rico, which was still reeling from the impacts of Irma. The strongest hurricane to hit the US territory in 89 years, Maria has flooded homes and businesses with as much as seven to ten inches of water and destroyed the island’s already fragile electricity lines. All residents remain without power and there is no estimate on when it will be restored. Eighty-five percent of the 1,600 cellphone towers, and a majority of the above-ground and underground phone and internet cable lines have been destroyed. Officials say they have been unable to communicate with 40 of the 78 municipalities since Maria struck. To make matters worse, on Saturday, September 23, over 70,000 residents were evacuated because of the possible breach in the Guajataca Dam that holds back a man made lake, created to provide residents with fresh water. The consecutive string of deadly hurricanes has led to the perception that 2017 may be the worst hurricane season yet, while providing fuel for the ongoing debate about the effects of global warming. Read on to find out what experts think about these assumptions.

Describe the impact that these hurricanes have had on the people living in Puerto Rico, Florida and Texas.