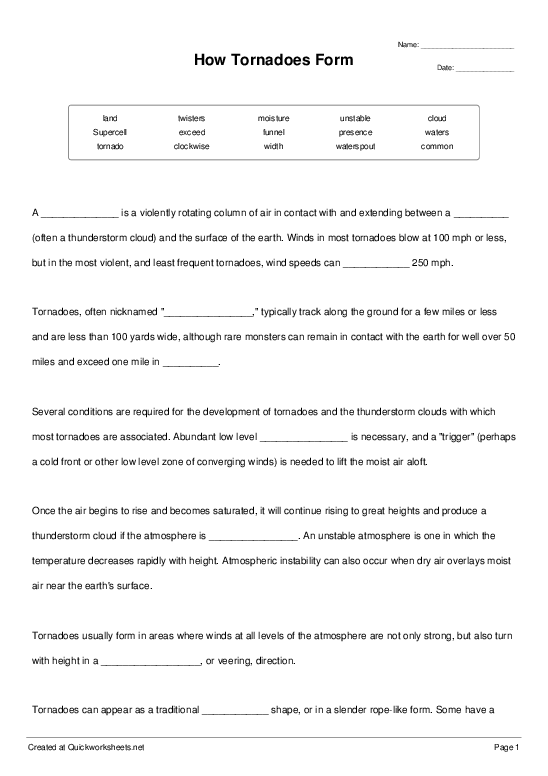 A tornado is a violently rotating column of air in contact with and extending between a cloud (often a thunderstorm cloud) and the surface of the earth. Winds in most tornadoes blow at 100 mph or less, but in the most violent, and least frequent tornadoes, wind speeds can exceed 250 mph. Tornadoes, often nicknamed "twisters," typically track along the ground for a few miles or less and are less than 100 yards wide, although rare monsters can remain in contact with the earth for well over 50 miles and exceed one mile in width. Several conditions are required for the development of tornadoes and the thunderstorm clouds with which most tornadoes are associated. Abundant low level moisture is necessary, and a "trigger" (perhaps a cold front or other low level zone of converging winds) is needed to lift the moist air aloft. Once the air begins to rise and becomes saturated, it will continue rising to great heights and produce a thunderstorm cloud if the atmosphere is unstable. An unstable atmosphere is one in which the temperature decreases rapidly with height. Atmospheric instability can also occur when dry air overlays moist air near the earth's surface. Tornadoes usually form in areas where winds at all levels of the atmosphere are not only strong, but also turn with height in a clockwise, or veering, direction. Tornadoes can appear as a traditional funnel shape, or in a slender rope-like form. Some have a churning, smoky look to them. Others contain "multiple vortices" -- small, individual tornadoes rotating around a common center. Even others may be nearly invisible, with only swirling dust or debris at ground level as the only indication of the tornado's presence. Tornadic phenomena can take several forms. Supercell Tornadoes Some of the most violent tornadoes develop from supercell thunderstorms. A supercell thunderstorm is a long-lived thunderstorm that has a continuously rotating updraft of air. These storms are the most impressive of all thunderstorms and can produce large hail and tornadoes, although less than half of all supercell thunderstorms produce tornadoes. Supercell thunderstorms and the tornadoes they sometimes produce are most common in the central part of the United States. Waterspout Resembling a tornado, a waterspout is usually less intense and causes far less damage. Rarely more than 50 yards wide, it forms over warm tropical ocean waters, although its funnel is made of fresh water from condensation, not salt water from the ocean. Waterspouts usually dissipate upon reaching land.