Hurricane Irma has been the most powerful and catastrophic hurricane of 2017. Complete the sentences below by using the words from the box. 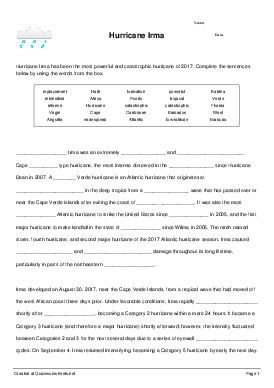 Hurricane Irma was an extremely powerful and catastrophic Cape Verde type hurricane, the most intense observed in the Atlantic since Hurricane Dean in 2007. A Cape Verde hurricane is an Atlantic hurricane that originates at low-latitude in the deep tropics from a tropical wave that has passed over or near the Cape Verde islands after exiting the coast of West Africa. It was also the most intense Atlantic hurricane to strike the United States since Katrina in 2005, and the first major hurricane to make landfall in the state of Florida since Wilma in 2005. The ninth named storm, fourth hurricane, and second major hurricane of the 2017 Atlantic hurricane season, Irma caused widespread and catastrophic damage throughout its long lifetime, particularly in parts of the northeastern Caribbean. Irma developed on August 30, 2017, near the Cape Verde Islands, from a tropical wave that had moved off the west African coast three days prior. Under favorable conditions, Irma rapidly intensified shortly after formation, becoming a Category 2 hurricane within a mere 24 hours. It became a Category 3 hurricane (and therefore a major hurricane) shortly afterward; however, the intensity fluctuated between Categories 2 and 3 for the next several days due to a series of eyewall replacement cycles. On September 4, Irma resumed intensifying, becoming a Category 5 hurricane by early the next day. On September 6, Irma reached its peak intensity with 185 mph (295 km/h) winds, making it the strongest tropical cyclone worldwide so far in 2017. The storm caused catastrophic damage in Barbuda, Saint Barthélemy, Saint Martin, Anguilla and the Virgin Islands as a Category 5 hurricane As of September 13, the hurricane has caused at least 61 deaths (one in Anguilla, one in Barbados, three in Barbuda, 10 in Cuba, 11 in the French West Indies, one in Haiti, three in Puerto Rico, four on the Dutch side of Sint Maarten, 23 in the contiguous United States, and four in the U.S. Virgin Islands)