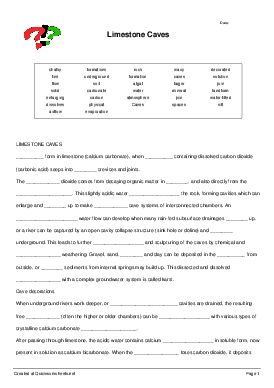 LIMESTONE CAVES Caves form in limestone (calcium carbonate), when water containing dissolved carbon dioxide (carbonic acid) seeps into rock crevices and joints. The carbon dioxide comes from decaying organic matter in soil, and also directly from the atmosphere. This slightly acidic water dissolves the rock, forming cavities which can enlarge and join up to make larger cave systems of interconnected chambers. An underground water flow can develop when many rain-fed subsurface drainages join up, or a river can be captured by an open cavity collapse structure (sink hole or doline) and flow underground. This leads to further enlarging and sculpturing of the caves by chemical and physical weathering. Gravel, sand, silt and clay can be deposited in the caves from outside, or fine sediments from internal springs may build up. This dissected and dissolved landform with a complex groundwater system is called karst. Cave decorations When underground rivers work deeper, or water-filled cavities are drained, the resulting free spaces (often the higher or older chambers) can be decorated with various types of crystalline calcium carbonate formations. After passing through limestone, the acidic water contains calcium carbonate in soluble form, now present in solution as calcium bicarbonate. When the solution loses carbon dioxide, it deposits solid calcium carbonate again. The resulting mineral is usually calcite, but occasionally a calcium carbonate with different crystal form can grow (aragonite). The solution can lose carbon dioxide when degassing through direct exposure to air, especially when it splashes, or flows over impediments. The resulting cave formations have a waxy, glistening appearance. Loss of carbon dioxide through evaporation plays a much lesser role, usually in areas of high airflow near cave entrances, but the resulting cave formation usually look dull and chalky. Bacterial and algal colonies can also play a role in deposition of calcium carbonate.