Student Task: Listen carefully as your teacher reads the text below. Use the words in the box below to fill in the gaps. Answer the question that follows and then hand this worksheet to your teacher for checking. Paste into your books when it has been checked. 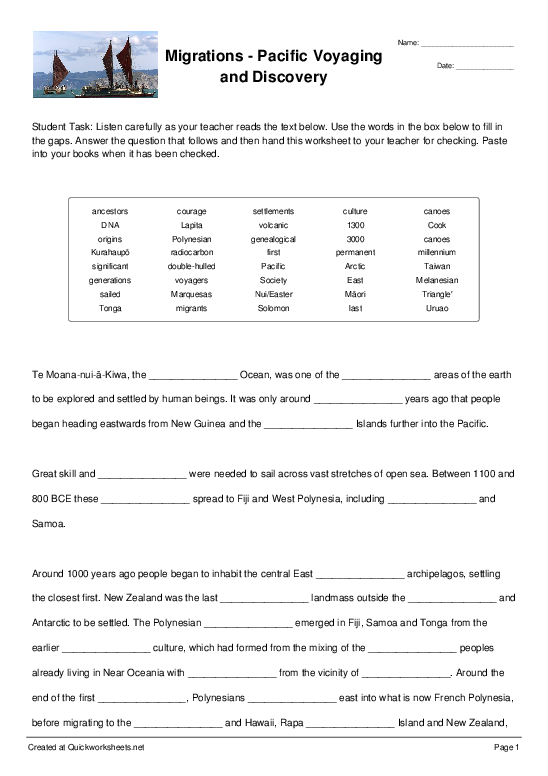 Te Moana-nui-ā-Kiwa, the Pacific Ocean, was one of the last areas of the earth to be explored and settled by human beings. It was only around 3000 years ago that people began heading eastwards from New Guinea and the Solomon Islands further into the Pacific. Great skill and courage were needed to sail across vast stretches of open sea. Between 1100 and 800 BCE these voyagers spread to Fiji and West Polynesia, including Tonga and Samoa. Around 1000 years ago people began to inhabit the central East Polynesian archipelagos, settling the closest first. New Zealand was the last significant landmass outside the Arctic and Antarctic to be settled. The Polynesian culture emerged in Fiji, Samoa and Tonga from the earlier Lapita culture, which had formed from the mixing of the Melanesian peoples already living in Near Oceania with migrants from the vicinity of Taiwan. Around the end of the first millennium, Polynesians sailed east into what is now French Polynesia, before migrating to the Marquesas and Hawaii, Rapa Nui/Easter Island and New Zealand, the far corners of the 'Polynesian Triangle'. A broad range of evidence – including radiocarbon dating, analysis of pollen (which measures vegetation change) and volcanic ash, DNA evidence, genealogical dating and studies of animal extinction and decline – suggests that New Zealand's first permanent settlements were established between 1250 and 1300. These migrants, who sailed in double-hulled canoes from East Polynesia (specifically the Society Islands, the southern Cook Islands and the Austral Islands in French Polynesia), were the ancestors of the Māori people.' Although it was once believed that the ancestors of Māori came to New Zealand in a single ‘great fleet’ of seven canoes, we now know that many canoes made the perilous voyage. Through stories passed down the generations, tribal groups trace their origins to the captains and crew of more than 40 legendary vessels, from the Kurahaupō at North Cape to the Uruao in the South Island. Source: https://nzhistory.govt.nz/culture/encounters/polynesian-voyaging

What skills did the ancient Polynesian voyagers need to sail the Pacific ocean?