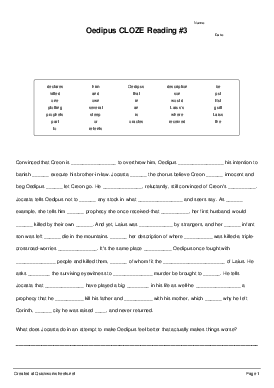 Convinced that Creon is plotting to overthrow him, Oedipus declares his intention to banish or execute his brother-in-law. Jocasta and the chorus believe Creon is innocent and beg Oedipus to let Creon go. He relents, reluctantly, still convinced of Creon's guilt. Jocasta tells Oedipus not to put any stock in what prophets and seers say. As an example, she tells him the prophecy she once received—that Laius, her first husband, would be killed by their own son. And yet, Laius was killed by strangers, and her own infant son was left to die in the mountains. But her description of where Laius was killed—a triple-crossroad—worries Oedipus. It's the same place where Oedipus once fought with several people and killed them, one of whom fit the description of Laius. He asks that the surviving eyewitness to Laius's murder be brought to him. He tells Jocasta that oracles have played a big part in his life as well—he received a prophecy that he would kill his father and sleep with his mother, which is why he left Corinth, the city he was raised in, and never returned.

What does Jocasta do in an attempt to make Oedipus feel better that actually makes things worse?