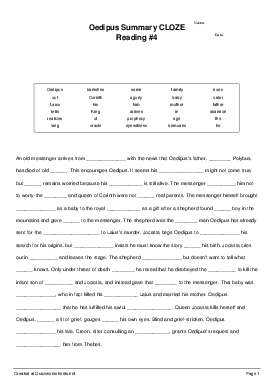 An old messenger arrives from Corinth with the news that Oedipus's father, King Polybus, has died of old age. This encourages Oedipus. It seems his prophecy might not come true, but he remains worried because his mother is still alive. The messenger tells him not to worry—the king and queen of Corinth were not his real parents. The messenger himself brought Oedipus as a baby to the royal family as a gift after a shepherd found the boy in the mountains and gave him to the messenger. The shepherd was the same man Oedipus has already sent for—the eyewitness to Laius's murder. Jocasta begs Oedipus to abandon his search for his origins, but Oedipus insists he must know the story of his birth. Jocasta cries out in agony and leaves the stage. The shepherd arrives but doesn't want to tell what he knows. Only under threat of death does he reveal that he disobeyed the order to kill the infant son of Laius and Jocasta, and instead gave that baby to the messenger. That baby was Oedipus, who in fact killed his father Laius and married his mother. Oedipus realizes that he has fulfilled his awful prophecy. Queen Jocasta kills herself and Oedipus, in a fit of grief, gouges out his own eyes. Blind and grief-stricken, Oedipus bemoans his fate. Creon, after consulting an oracle, grants Oedipus's request and banishes him from Thebes.

How does Oedipus discover the truth about his origins? What do he and Jocasta do as a result of learning the truth?