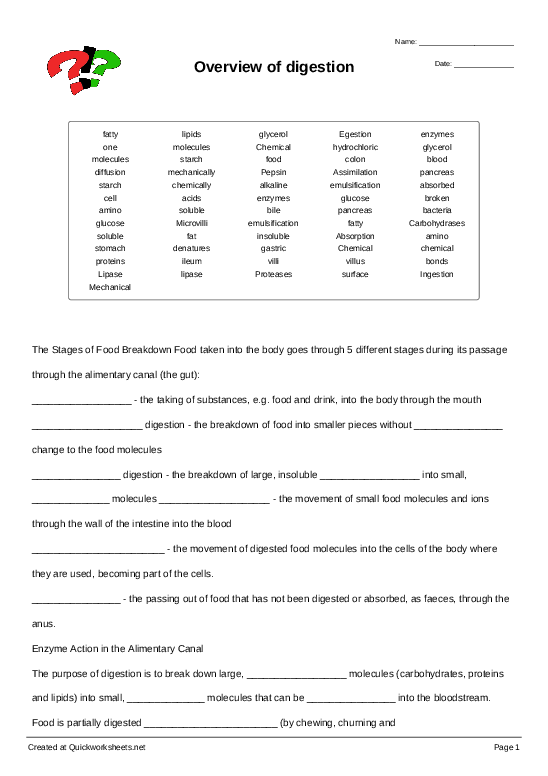 The Stages of Food Breakdown Food taken into the body goes through 5 different stages during its passage through the alimentary canal (the gut): Ingestion - the taking of substances, e.g. food and drink, into the body through the mouth Mechanical digestion - the breakdown of food into smaller pieces without chemical change to the food molecules Chemical digestion - the breakdown of large, insoluble molecules into small, soluble molecules Absorption - the movement of small food molecules and ions through the wall of the intestine into the blood Assimilation - the movement of digested food molecules into the cells of the body where they are used, becoming part of the cells. Egestion - the passing out of food that has not been digested or absorbed, as faeces, through the anus. Enzyme Action in the Alimentary Canal The purpose of digestion is to break down large, insoluble molecules (carbohydrates, proteins and lipids) into small, soluble molecules that can be absorbed into the bloodstream. Food is partially digested mechanically (by chewing, churning and emulsification) in order to break large pieces of food into smaller pieces of food which increases the surface area for enzymes to work on. Digestion mainly takes place chemically, where bonds holding the large molecules together are broken to make smaller and smaller molecules. Chemical digestion is controlled by enzymes which are produced in different areas of the digestive system There are three main types of digestive enzymes - carbohydrases, proteases and lipases. Carbohydrases: Amylases are produced in the mouth and the pancreas (secreted into the duodenum). Amylases digest starch into smaller sugars. Amylase is secreted into the alimentary canal in the mouth and the duodenum (from the pancreas) and digests starch to maltose (a disaccharide). Maltose is digested by the enzyme maltase into glucose . Proteases: Proteases are a group of enzymes that break down proteins into amino acids in the stomach. Protein digestion with two main enzymes produced: Pepsin is produced in the stomach. Trypsin is produced in the pancreas and secreted into the duodenum. Lipases. Lipase enzymes are produced in the pancreas and secreted into the duodenum. They digest lipids into fatty acids and glycerol. The Role of Hydrochloric Acid The stomach produces several fluids which together are known as gastric juice. One of the fluids produced is hydrochloric acid. This kills bacteria in food and gives an acid pH for enzymes to work in the stomach. How is a Low pH Helpful in the Stomach? The low pH kills bacteria in food that we have ingested as it denatures the enzymes in their cells, meaning they cannot carry out any cell reactions to maintain life. Pepsin, produced in the stomach, is an example of an enzyme which has a very low optimum pH - around pH 2. The hydrochloric acid produced in the stomach ensures that conditions in the stomach remain within the optimum range for pepsin to work at its fastest rate. The Role of Bile Cells in the liver produce bile which is then stored in the gallbladder. Bile has two main roles: It is alkaline to neutralise the hydrochloric acid which comes from the stomach. The enzymes in the small intestine have a higher (more alkaline) optimum pH than those in the stomach. It breaks down large drops of fat into smaller ones. This is known as emulsification. The larger. surface area allows lipase to chemically break down the lipid into glycerol and fatty acids faster. Absorption of Food & Water Absorption is the movement of digested food molecules from the digestive system into the blood ,glucose and amino acids, and lymph fatty acids and glycerol. Water is absorbed in the colon, also happens in the small intestine. How is the Ileum Adapted for Absorption? The ileum is adapted for absorption as it is very long and has a highly folded surface with millions of villi tiny, finger like projections. These adaptations massively increase the surface area of the ileum, allowing absorption to take place faster and more efficiently. Adaptations of the small intestine. Microvilli on the surface of the villus further increase surface area for faster absorption of nutrients. Wall of villus is one cell thick meaning that there is only a short distance for absorption to happen by diffusion and active transport. Well supplied with a network of blood capillaries that transport glucose and amino acids away from the small intestine in the blood. Lacteal runs through the centre of the villus to transport fatty acids and glycerol away from the small intestine in the lymph.