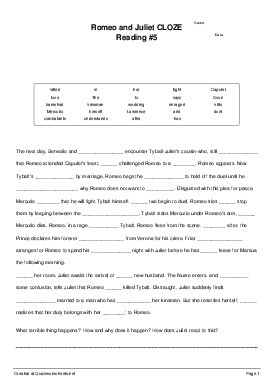 The next day, Benvolio and Mercutio encounter Tybalt—Juliet’s cousin—who, still enraged that Romeo attended Capulet’s feast, has challenged Romeo to a duel. Romeo appears. Now Tybalt’s kinsman by marriage, Romeo begs the Capulet to hold off the duel until he understands why Romeo does not want to fight. Disgusted with this plea for peace, Mercutio says that he will fight Tybalt himself. The two begin to duel. Romeo tries to stop them by leaping between the combatants. Tybalt stabs Mercutio under Romeo’s arm, and Mercutio dies. Romeo, in a rage, kills Tybalt. Romeo flees from the scene. Soon after, the Prince declares him forever banished from Verona for his crime. Friar Lawrence arranges for Romeo to spend his wedding night with Juliet before he has to leave for Mantua the following morning. In her room, Juliet awaits the arrival of her new husband. The Nurse enters, and, after some confusion, tells Juliet that Romeo has killed Tybalt. Distraught, Juliet suddenly finds herself married to a man who has killed her kinsman. But she resettles herself, and realizes that her duty belongs with her love: to Romeo.

What terrible thing happens? How and why does it happen? How does Juliet react to this?