That vs. Which vs. Who 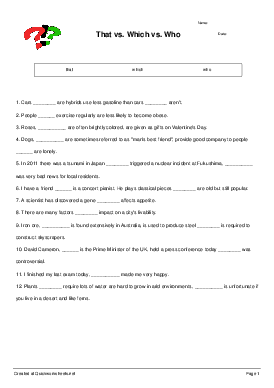 1. Cars that are hybrids use less gasoline than cars that aren't. 2. People who exercise regularly are less likely to become obese. 3. Roses, which are often brightly colored, are given as gifts on Valentine's Day. 4. Dogs, which are sometimes referred to as "man's best friend", provide good company to people who are lonely. 5. In 2011 there was a tsunami in Japan that triggered a nuclear incident at Fukushima, which was very bad news for local residents. 6. I have a friend who is a concert pianist. He plays classical pieces that are old but still popular. 7. A scientist has discovered a gene that affects appetite. 8. There are many factors that impact on a city's livability. 9. Iron ore, which is found extensively in Australia, is used to produce steel that is required to construct skyscrapers. 10. David Cameron, who is the Prime Minister of the UK, held a press conference today that was controversial. 11. I finished my last exam today, which made me very happy. 12. Plants that require lots of water are hard to grow in arid environments, which is unfortunate if you live in a desert and like ferns.

An intermediate to advanced worksheet reviewing the correct usage of "that", "which" and "who".