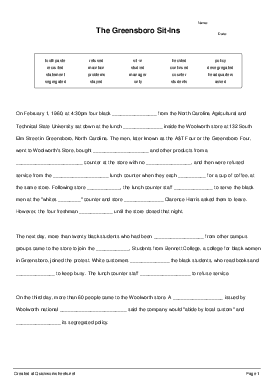 On February 1, 1960, at 4:30pm four black students from the North Carolina Agricultural and Technical State University sat down at the lunch counter inside the Woolworth store at 132 South Elm Street in Greensboro, North Carolina. The men, later known as the A&T Four or the Greensboro Four, went to Woolworth's Store, bought toothpaste and other products from a desegregated counter at the store with no problems, and then were refused service from the segregated lunch counter when they each asked for a cup of coffee, at the same store. Following store policy, the lunch counter staff refused to serve the black men at the "whites only" counter and store manager Clarence Harris asked them to leave. However, the four freshman stayed until the store closed that night. The next day, more than twenty black students who had been recruited from other campus groups came to the store to join the sit-in. Students from Bennett College, a college for black women in Greensboro, joined the protest. White customers heckled the black students, who read books and studied to keep busy. The lunch counter staff continued to refuse service. On the third day, more than 60 people came to the Woolworth store. A statement issued by Woolworth national headquarters said the company would "abide by local custom" and maintain its segregated policy.

The Greensboro Sit In