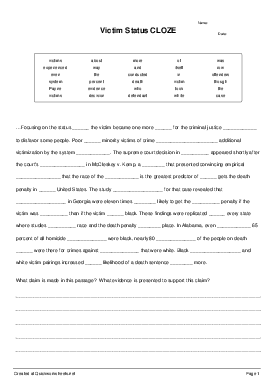 …Focusing on the status of the victim became one more way for the criminal justice system to disfavor some people. Poor and minority victims of crime experienced additional victimization by the system itself. The supreme court decision in Payne appeared shortly after the court’s decision in McCleskey v. Kemp, a case that presented convincing empirical evidence that the race of the victim is the greatest predictor of who gets the death penalty in the United States. The study conducted for that case revealed that offenders in Georgia were eleven times more likely to get the death penalty if the victim was white than if the victim was black. These findings were replicated in every state where studies about race and the death penalty took place. In Alabama, even though 65 percent of all homicide victims were black, nearly 80 percent of the people on death row were there for crimes against victims that were white. Black defendant and white victim pairings increased the likelihood of a death sentence even more.

What claim is made in this passage? What evidence is presented to support this claim?