Complete the sentences and paragraphs by using the words in the box. Your teacher will read the passage out loud first, so listen carefully. After you have completed the CLOZE activity, select 10 words and create a GLOSSARY. 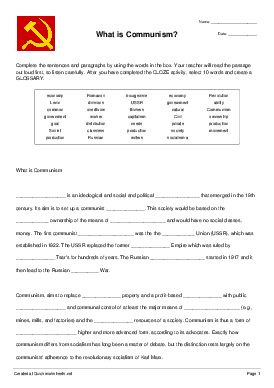 What is Communism Communism is an ideological and social and political movement that emerged in the 19th century. Its aim is to set up a communist society. This society would be based on the common ownership of the means of production and would have no social classes, money. The first communist government was the the Soviet Union (USSR), which was established in 1922. The USSR replaced the former Russian Empire which was ruled by Romanov Tsar's for hundreds of years. The Russian Revolution started in 1917 and it then lead to the Russian Civil War. Communism, aims to replace private property and a profit-based economy with public ownership and communal control of at least the major means of production (e.g., mines, mills, and factories) and the natural resources of a society. Communism is thus a form of socialism—a higher and more advanced form, according to its advocates. Exactly how communism differs from socialism has long been a matter of debate, but the distinction rests largely on the communists’ adherence to the revolutionary socialism of Karl Marx. The Communist Manifesto According to communist writers and thinkers, the goal of communism is to create a stateless, classless society. Communist thinkers believe this can happen if the people take away the power of the bourgeoisie (the ruling class, who own the means of production) and establish worker control of the means of production. Like most writers of the 19th century, Karl Marx tended to use the terms communism and socialism interchangeably. Marx identified two phases of communism that would follow the predicted overthrow of capitalism: the first would be a transitional system in which the working class would control the government and economy yet still find it necessary to pay people according to how long, hard, or well they worked; the second would be fully realized communism, namely a society without class divisions or government, in which the production and distribution of goods would be based upon the principle “From each according to his ability, to each according to his needs.” Marx’s followers, especially the Russian revolutionary Vladimir Ilich Lenin, took up this distinction. Lenin became the first leader of the USSR in 1922. He died in 1924. Sources: https://simple.wikipedia.org/wiki/Communism https://www.britannica.com/topic/communism