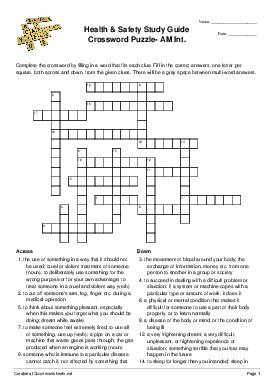 Abuse the use of something in a way that it should not be used; cruel or violent treatment of someone (noun); to deliberately use something for the wrong purpose or for your own advantage; to treat someone in a cruel and violent way (verb) Amputate to cut off someone's arm, leg, finger etc. during a medical operation Circulation the movement of blood around your body; the exchange of information, money etc. from one person to another in a group or society Cope to succeed in dealing with a difficult problem or situation: if a system or machine copes with a particular type or amount of work, it does it Daydream to think about something pleasant, especially when this makes you forget what you should be doing; dream while awake Disability a physical or mental condition that makes it difficult for someone to use a part of their body properly, or to learn normally Exhaust to make someone feel extremely tired; to use all of something, use up (verb); a pipe on a car or machine that waste gases pass through; the gas produced when an engine is working (noun) Illness a disease of the body or mind, or the condition of being ill Immune someone who is immune to a particular disease cannot catch it; not affected by something that happens or is done; specially protected from something unpleasant Injection an act of putting a drug into someone's body using a special needle: shot: vaccination: immunization Injury a wound or damage to part of your body caused by an accident or attack Nightmare a very frightening dream; a very difficult, unpleasant, or frightening experience or situation; something terrible that you fear may happen in the future Objective something that you are trying hard to achieve, especially in business or politics: a place that you are trying to reach, especially in a military attack (noun): based on facts, or making a decision that is based on facts rather than on your feelings or beliefs ≠ subjective Oversleep to sleep for longer than you intended; sleep in Schedule a plan of what someone is going to do and when they are going to do it; a list that shows the times that buses, trains etc. leave or arrive at a particular place (noun): to plan that something will happen at a particular time (verb) Specialist someone who knows a lot about a particular subject, or is very skilled at it; expert: a doctor who knows more about one particular type of illness or treatment than other doctors Stress continuous feelings of worry about your work or personal life, that prevent you from relaxing, strain; the physical force or pressure on an object; the special attention or importance given to a particular idea, fact, or activity, emphasis; the degree of force or loudness with which a part of a word is pronounced or a note in music is played, which makes it sound stronger than other parts or notes (noun);to emphasize a statement, fact, or idea: to pronounce a word or part of a word so that it sounds louder or more forceful; to feel very worried about something (verb) Symptom something wrong with your body or mind which shows that you have a particular illness; a sign that a serious problem exists Unconscious unable to see, move, feel etc. in the normal way because you are not conscious; a feeling or thought that is unconscious is one that you have without realizing it, subconscious; be unconscious, or unaware, of something; an action that is unconscious is not deliberate