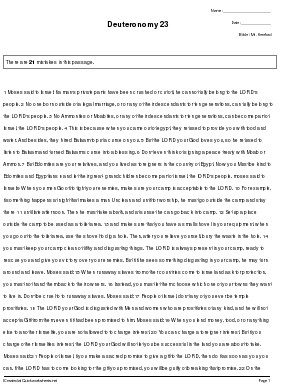 1 Moses said to Israel: If a man's private parts have been crushed or cut off, he cannot fully belong to the LORD's people. 2 No one born outside of a legal marriage, or any of their descendants for ten generations, can fully belong to the LORD's people. 3 No Ammonites or Moabites, or any of their descendants for ten generations, can become part of Israel, the LORD's people. 4 This is because when you came out of Egypt, they refused to provide you with food and water. And besides, they hired Balaam to put a curse on you. 5 But the LORD your God loves you, so he refused to listen to Balaam and turned Balaam's curse into a blessing. 6 Don't even think of signing a peace treaty with Moab or Ammon. 7 But Edomites are your relatives, and you lived as foreigners in the country of Egypt. Now you must be kind to Edomites and Egyptians 8 and let their great- grandchildren become part of Israel, the LORD's people. Moses said to Israel:9 When you men go off to fight your enemies, make sure your camp is acceptable to the LORD. 10 For example, if something happens at night that makes a man unclean and unfit for worship, he must go outside the camp and stay there 11 until late afternoon. Then he must take a bath, and at sunset he can go back into camp. 12 Set up a place outside the camp to be used as a toilet area. 13 And make sure that you have a small shovel in your equipment. When you go out to the toilet area, use the shovel to dig a hole. Then, after you relieve yourself, bury the waste in the hole. 14 You must keep your camp clean of filthy and disgusting things. The LORD is always present in your camp, ready to rescue you and give you victory over your enemies. But if he sees something disgusting in your camp, he may turn around and leave. Moses said:15 When runaway slaves from other countries come to Israel and ask for protection, you must not hand them back to their owners. 16 Instead, you must let them choose which one of your towns they want to live in. Don't be cruel to runaway slaves. Moses said:17 People of Israel, don't any of you ever be temple prostitutes. 18 The LORD your God is disgusted with men and women who are prostitutes of any kind, and he will not accept a gift from them, even if it had been promised to him. Moses said:19 When you lend money, food, or anything else to another Israelite, you are not allowed to charge interest. 20 You can charge a foreigner interest. But if you charge other Israelites interest, the LORD your God will not let you be successful in the land you are about to take. Moses said:21 People of Israel, if you make a sacred promise to give a gift to the LORD, then do it as soon as you can. If the LORD has to come looking for the gift you promised, you will be guilty of breaking that promise. 22 On the other hand, if you never make a sacred promise, you can't be guilty of breaking it. 23 You must keep whatever promises you make to the LORD. After all, you are the one who chose to make the promises. 24 If you go into a vineyard that belongs to someone else, you are allowed to eat as many grapes as you want while you are there. But don't take any with you when you leave. 25 In the same way, if you are in a grain field that belongs to someone else, you can pick heads of grain and eat the kernels. But don't cut down the stalks of grain and take them with you. (CEV)